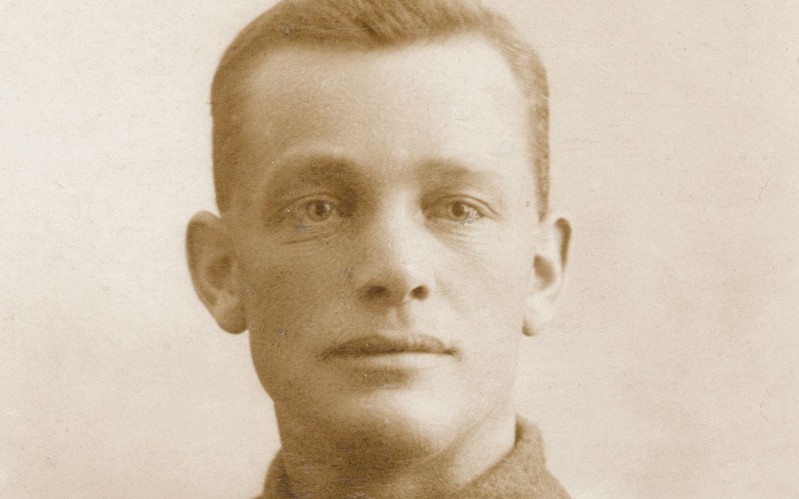 The Battle of Neuve Chapelle

During the first months of the war the Germans had captured large parts of northern France and Belgium. They built defences in order to hold this ground, hoping to bargain with it when peace came. As a result their trenches were substantial from the start.

The British and French always viewed trenches as temporary measures. Digging in deep risked sapping morale. Trenches would only be needed until the next ‘Big Push’, the attack that would bring the return of mobile warfare and eventual liberation.

The first major British offensive of the war occurred on 10 March 1915 when they attacked the salient around the village of Neuve Chapelle, located midway between Bethune and Lille. The assault was undertaken by General Sir Douglas Haig’s First Army, with Lieutenant-General Sir Henry Rawlinson’s IV Corps on the left and General Sir James Willcock’s Indian Corps on the right.

Although the initial artillery bombardment was too light to entirely disrupt the enemy defences, the first phase of the infantry attack went well. The soldiers rapidly gained the German front-line trenches. By nightfall Neuve Chapelle had been captured.

Unfortunately, there were delays in sending further orders and getting reinforcements forward. The initial gains were not exploited and a German counter-attack prevented further progress. After three days’ fighting, the British had gained a small area of land at a cost of over 7,000 British and 4,000 Indian casualties.

The offensive demonstrated that although it was possible to break into the German positions, it was not so easy to convert this kind of local success into a major breakthrough. It also showed that a heavier artillery bombardment and better communication were needed.

Indeed, after the battle, the British Commander-in-Chief, Field Marshal Sir John French, claimed the attack had failed due to a lack of shells. This led to the ‘Shell Crisis’ of 1915 and the collapse of Herbert Asquith’s Liberal Government.

A new coalition government was formed with Lloyd George as Minister of Munitions. The creation of this new post was a recognition that the whole economy would have to be geared for total war if the Allies were to prevail on the Western Front.

‘The Victory is won, but oh! Gawd wot a cost’

One of the men who survived the fighting was Company Sergeant Major Jack Gray of 2nd Battalion The Princess Charlotte of Wales’s (Royal Berkshire Regiment). The battle clearly left a mark on Gray, who wrote a poem entitled ‘Neuve Chapelle’.

Although officer poets like Siegfried Sassoon, Wilfred Owen and Robert Graves are rightly celebrated, other ranks like Gray (who often lacked the formal education of their officer counterparts) also produced intriguing work, much of it unpublished.

Six months of misery, six months of hell,
Drenched an’ ‘arf frozen but stickin’ it well,
Sniped in the darkness an’ shelled in the light,
Gawd ‘ow we longed for the chance of a fight.
Workin’ all night wi’ the mud to our knees,
Diggin like blazes in case we should freeze.
Would the sun never shine? We were stuck in our trench
Wi’ the mud an’ the rain! One continual drench,
Was wot we ‘ad to stick; an’ we dreamed every day,
Of pals who ‘ad gone, an’ the debts we’d to pay.
Till at last came the order ‘go back for a rest’.
We ‘ad seven days o’ that an’ I likes work the best,
If that’s wot they calls restin’, a drillin’ all day,
An’ a workin’ all night; but twas making the way,
For a glorious attack, so we done the work well,
Then the order came ‘Boys you’ve to take Neuve Chapelle’.

Royal Berkshires an’ Lincolns to lead the attack,
Irish Rifles an’ Rifle Brigade at their back,
An’ the Iron Dook ‘imself never led troops more fine,
Than the ole 25th Brigade – pride o’ the Line.
Well, we marched out o’ billets all singin’ an gay,
At the thoughts of a beautiful scrap the next day.
Till the order came down ‘no more singin’, no noise,
We are near the position, no more talkin’ boys’!
Then in silence we marched to the trench just an old
Bit o’ ditch, full o’ water, an’ perishin’ cold,
An’ that long weary wait for the dawn to appear,
Will stick in my mem’ry for many a year.
At last came the mornin’ ‘an with it a strange
Sort o’ silence – then boom – as the guns got the range.
Fix bayonets! Stand ready, an’ keep in line well,
An’ get ready boys for to take Neuve Chapelle.

Then Hell was let loose, as a wild awful sound,
Which deafened our ear drums an’ shook the whole ground,
Grew louder, more fearful, as four hundred guns,
Sent their message of death to the lines o’ the Huns.
The fierce bark o’ quick-fires, the howitzers roar,
An’ the dull boom o’ siege guns, an’ field guns galore.
T’was an earthquake, a cyclone, a landslip in one,
When that ‘orrible, awful bombardment begun.
The stink o’ the lyddite an’ thick yellow smoke,
As ‘ouses went down an’ the barbed wire was broke,
An’ brave men went white an’ were tremblin’ wi’ dread,
An’ the scream o’ that shrapnel still rings in my ‘ead.
Then we looked to our rifles to see they were right,
Shook ‘ands wiv old pals ‘case we fell in the fight,
Wished each other good luck, an’ old Smithy my pal,
Ses ‘I’ll meet yer tonight when we’ve took Neuve Chapelle.

Now the old foot-sloggers! Infantry bold,
Charge! As yer fathers did in the days of old.
Charge! For yer wimmin’ fer Gawd an’ the right,
What though ye fall in so glorious a fight.
Over the parapet t’is but a dash,
Of a few hundred yards wi’ the roar an’ the crash,
O’ the guns in our ears an’ a deep sobbin’ breath,
As our pals fall around us all awful in death.
Fallin’ like leaves but still onward the line
Of the Berkshires an’ Lincolns swept; Gawd it was fine!
Grimy an’ bloodstained an’ plastered wi’ mud,
We broke thro’ their first line an’ then the dull thud,
As the bay’nets went ‘ome an’ the Huns turned an’ ran,
While we followed up closely, fer every man,
‘Ad a debt to pay back, an’ we paid ‘em up well,
Wi’ some int’rest to spare, ere we reached Neuve Chapelle.

Onward, still onward, two more lines to take,
But see! – the Bavarians waver – they break!
These are no Landsturm, nor cravens, I’d swear,
That the pride o’ the whole Germany Army was there,
Tried vet’rans all, an’ Gawd ‘ow they fought,
Ne’er was a victory more dearly bought.
Shootin’ an’ stabbin’ the blood flowin’ fast,
‘One more rush – all together boys – Broke ‘em at last.
Now dig fer yer lives lads, lie close to the ground’.
Same ole machine-guns, an’ same ‘orrid sound,
As the bullets come searchin’ us hissin’ like sin.
‘Ow we cursed an’ we prayed as we dug ourselves in,
Workin’ ‘an sweatin’ midst that ‘ail o’ lead,
We got cover at last an’ now take a breath,
An’ a smoke boys, light up you ‘ave earned one so well,
Three lines o’ trenches won ‘Now – Neuve Chapelle!’

‘Ere comes the Irish an’ Rifle Brigade,
Ter show ‘em the stuff of which Britons are made.
Faces set grim, not a man lookin’ back,
As they pass thro’ our ranks to begin the attack
On the village in front, which is now strongly ‘eld,
By the cursed machine-guns, but battered and shelled,
The ole Rifles pressed on wi’ that look on each face,
Of sure steady purpose, an’ pride o’ the race.
‘Ouse by ‘ouse, street by street, they are forcin’ ‘em back,
Not a pause or a waver in that fierce attack.
An’ now the big German guns add to the din,
As shells whistle over, an’ roofs tumble in.
An’ ‘ouses fly upwards, an’ fill us wi’ fear,
For the brave lads in front there, but ‘ark’ such a cheer
Rends the air, An’ we know they ‘ave got thro’ that hell,
An the ole 25th Brigade’s took Neuve Chapelle.

Took it, an’ ‘eld it too, ‘gainst fierce attack,
As they came on in thousands we still rolled ‘em back,
Crushed an’ defeated; no treach’rous Hun,
Shall again tread the soil which was so ‘ardly won.
Now look around fer the pals that you’ve lost,
The Victory is won, but oh! Gawd wot a cost.
They war’nt no saints, but just plain ‘Reg’lar Boys’,
True, rough and ready an’ fond of a noise.
Still, I’d take their chance on the great Judgement Day
‘Gainst some pious gentle folk, who, I daresay,
Wouldn’t a’ shook ‘ands wi’ them, not in times o’ peace.
But the Great Maker knows an’ when all wars shall cease,
An’ the last Roll is called, well, I feel sure that then,
Christ won’t be ‘ard, ‘cause they died fer men.
So we’ll pray to the Maker that all may be well
Wi’ the laddies who died when we took Neuve Chapelle.

John Arthur Gray (1885-1917) was the son of Frederick and Eliza Gray of 49 (later 68) Green Street, High Wycombe. Known as ‘Jack’, he was the eldest of five children and had two brothers and sisters.

Gray enlisted at Reading in 1905 with 1st Battalion The Royal Berkshire Regiment and gave his occupation as ‘wool sorter’. He served with his unit in Britain and Ireland before transferring to the 2nd Battalion with whom he served in India.

In August 1914 Gray’s battalion left Jhansi in India and arrived back in England in late October. It soon joined 25th Brigade of 8th Division. This formation consisted of Regular Army units that had been stationed around the British Empire. It landed at Le Havre in France on 5 November 1914, a much-needed reinforcement for the hard-pressed British Expeditionary Force (BEF). Gray was soon promoted to company sergeant major.

In the weeks that followed Neuve Chapelle, Gray was awarded the Distinguished Conduct Medal (DCM). His citation states: ‘For conspicuous gallantry and ability on 9 May 1915 near Rouges Banes in handling his company after all the officers had been killed or wounded. He rallied the men under heavy fire at a critical period of the engagement moving about from place to place quite regardless of his own safety and gave a splendid example of coolness and courage.’

Gray continued to serve on the Western Front, fighting at Ovillers on the Somme where his battalion was badly mauled in July 1916. He was commissioned as a second lieutenant in November 1916 for service in the field.

Gray was killed in action assaulting a section of the Hindenburg Line near Bapaume on 4 March 1917, aged 31. His effects were sent on to his family at 3 Remington Terrace, High Wycombe. His remains were interred at Sailly-Saillisel British Cemetery on the Somme. He is also commemorated on a plaque at the entrance to Wycombe Hospital. 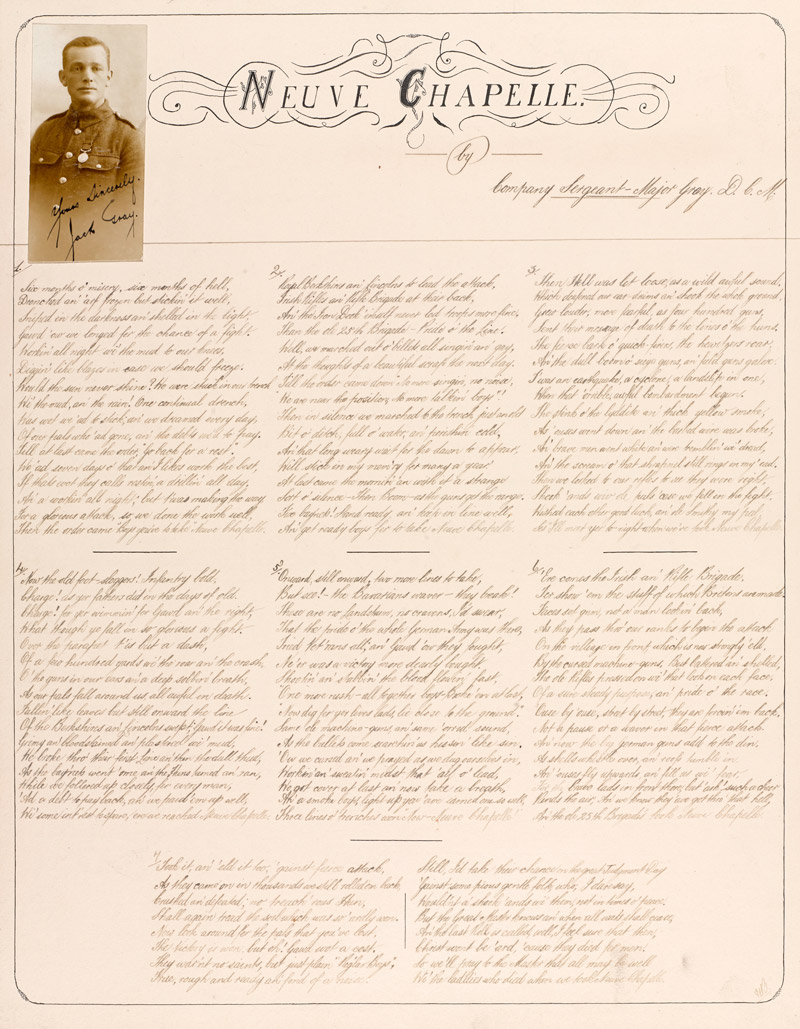 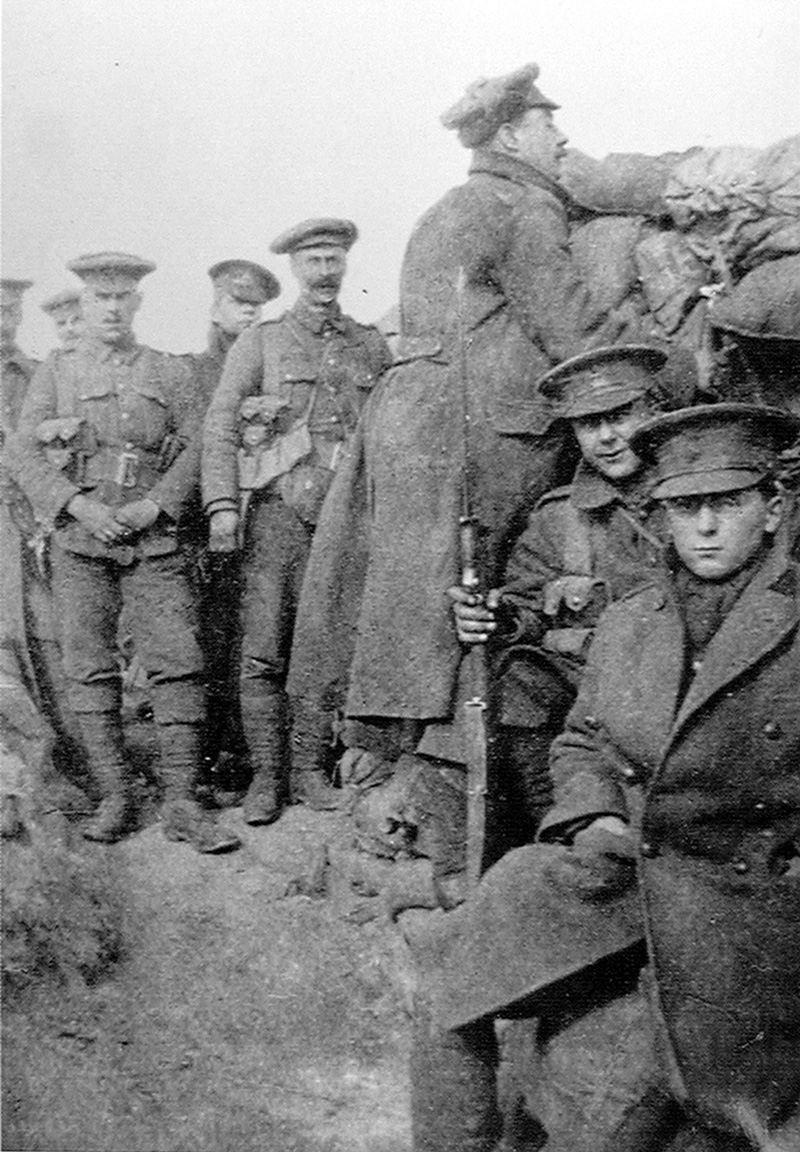 Members of 2nd Battalion The Princess Charlotte of Wales's (Royal Berkshire Regiment) in the trenches, c1915 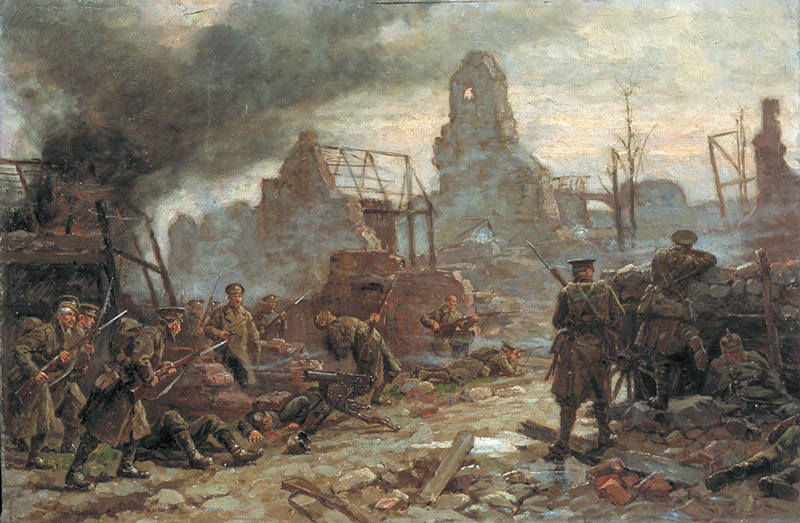 The taking of Neuve-Chapelle (Pas-de-Calais) by the British, 10 March 1915 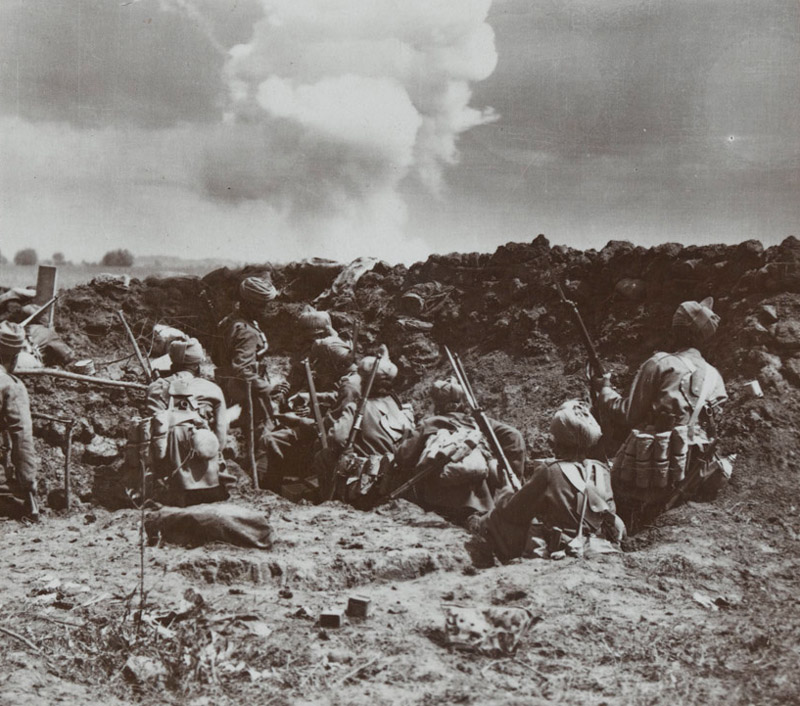 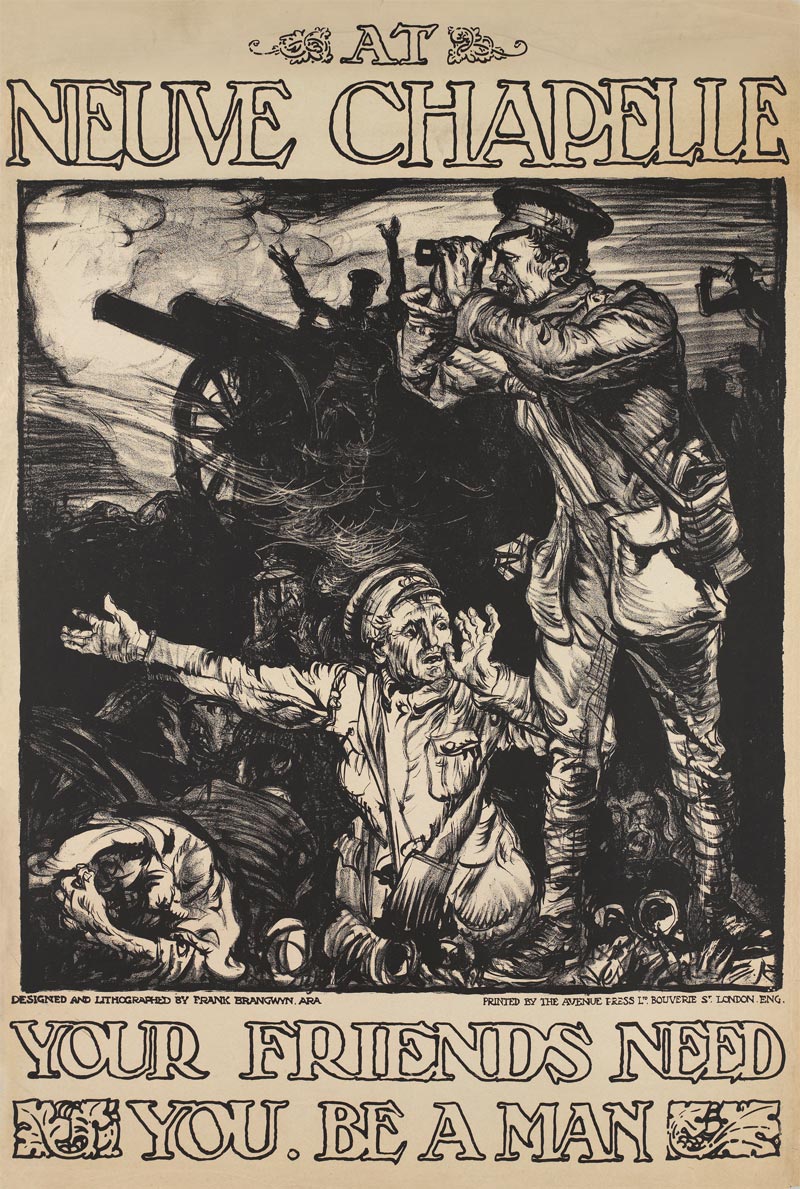 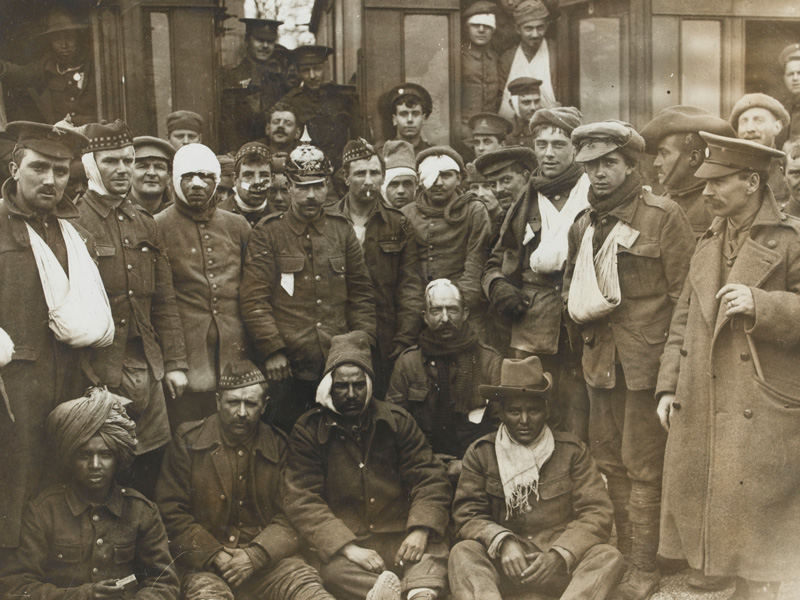 British and Indian wounded from Neuve Chapelle on the way to hospital base, 1915