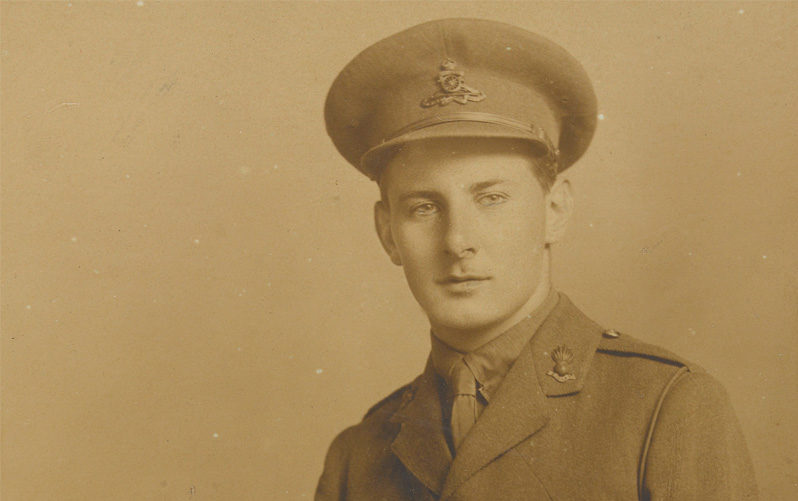 For thousands of families who had suffered the loss of loved ones during the war, the signing of the Armistice on 11 November 1918 was a bittersweet occasion. Feelings of jubilation and relief that the fighting had ended were tempered by heartache and anguish at the terrible price that had been paid for peace.

A collection of letters and photographs from our archive underlines the conflicting emotions of that time. They describe the death of 19-year-old Second Lieutenant Noel Evans on the morning peace was signed, and the impact it had on those close to him.

The Allied victory at Amiens in August 1918 began a period known as the ‘Hundred Days’. This series of offensives along the line succeeded in driving the Germans back.

On 26 September, the British finally broke through the Hindenburg Line, crossing the St Quentin Canal three days later. During the next two months, the Allies continued their pursuit. 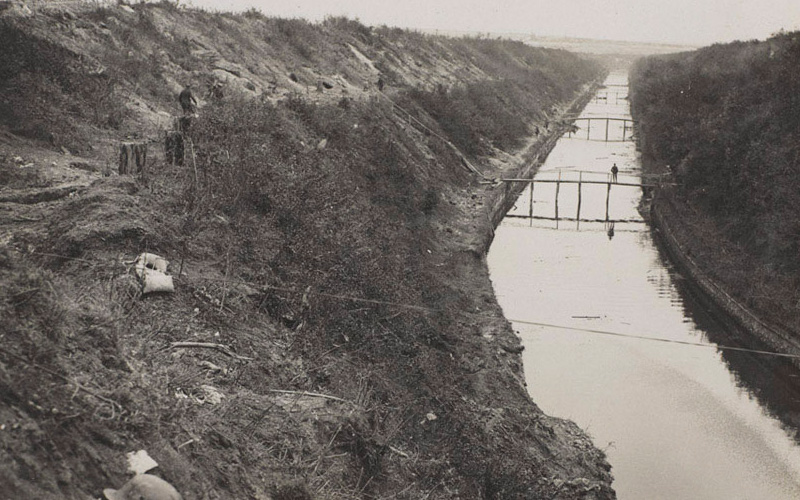 The St Quentin Canal, part of the Hindenberg Line near Bellanglise, 2 October 1918

Noel Evans had arrived at the front in mid-September 1918. He was serving with 121st Battery in the 27th Brigade, Royal Field Artillery, the unit in which his brother Major Morgan Evans MC also served. Their brigade was part of the 5th Division.

By the time Noel arrived, this formation had been in almost continuous action since the German Spring Offensive of March 1918. Noel’s battery went on to fight with the division in several battles including Havrincourt (12 September 1918), the River Selle (17-26 October 1918) and Valenciennes (1 November 1918).

Despite the hardships and privations of the front, his letters convey a spirit of optimism that victory was near.

‘Having quite a good time and I went up to the gun line yesterday; they had a great day with the Bosche. Morgan and I have succeeded very well in missing each other ever since we first met. His battery is alongside ours at present. I think the news is awfully good: Bulgaria and Turkey given in: we won’t last long at that rate! And we are getting a move on here soon, I hope!’ 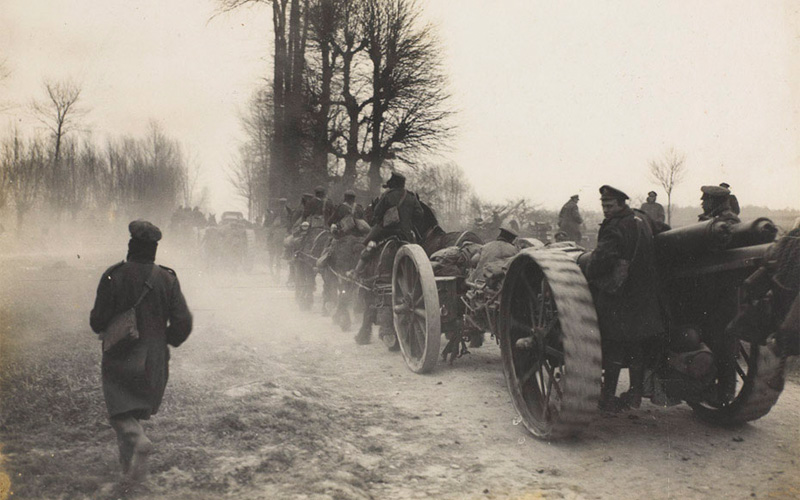 The Allies were now advancing and the end of the war was in sight. However, the conflict raged on with ferocious intensity and both sides continued to suffer severe losses.

Noel and his comrades were frequently exposed to grave dangers. During his short time at the front, he survived several near misses.

‘We are at the moment halting, waiting for more orders. We often see the civilians of the towns, they look very ill, most of them. I have been having quite a thrilling time lately being chased by shells, but so far have been very lucky. I have got a piece of shrapnel that missed my cheek by a fraction of an inch and hit a wall beside me, so pocketed it and moved on.’ 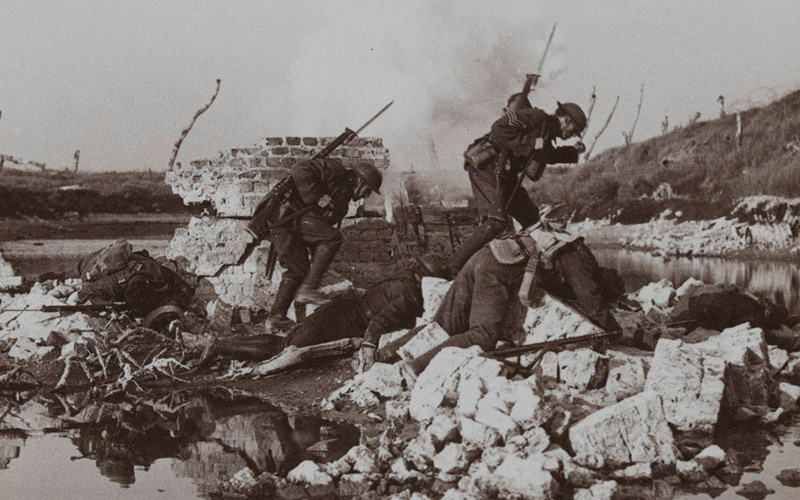 ‘Our fearless men fighting against great odds, the bridges and across the Crozat Canal’, 1918

Wounded on the Sambre

But Noel’s luck finally ran out during the Battle of the Sambre. On 4 November 1918, a week before the hostilities ended, a shell burst a few yards from the dug-out where he was on duty.

‘At about 6.30am, Noel went on duty and remained at the guns till 7.30am. Soon after this, at about 7.45am I should think, I was standing outside the dug-out and Noel walked towards me and we stood chatting for a few minutes; then I re-turned to the dug-out and had just stooped under the tarpaulin when a shell burst a few yards away. Our cook, who stood at the entrance of the dug-out, fell over on top of me, shot through the neck, and I was busy bandaging him when Noel was brought in. He appeared to be slightly wounded in the left thigh and right heel, and a tiny splinter was pulled out of the back of his head; his thigh seemed to worry him most, but the hit on the head had caused him to go temporarily blind: we put this down to concussion.’ 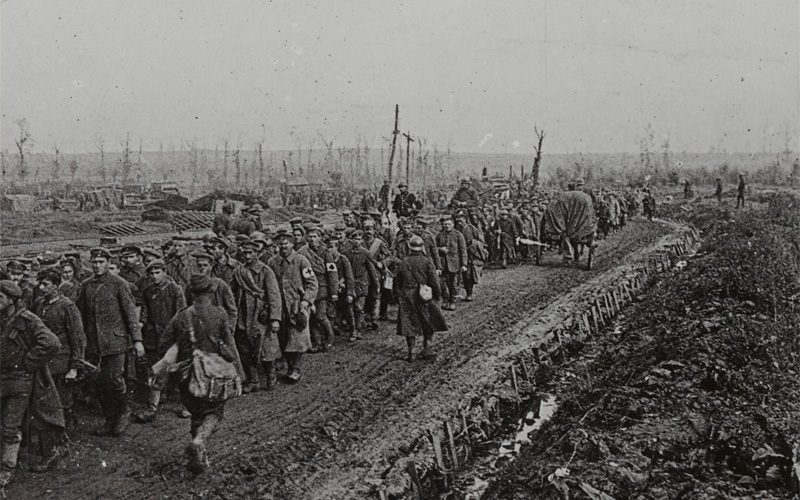 ‘Prisoners captured in the final rout of the German armies on the Sambre’, November 1918

Noel was evacuated to a hospital in the rear, while the Allied advance continued. Under relentless pressure, the Germans were eventually forced to sue for peace.

At 5am on 11 November 1918, in a railroad carriage at Compiègne in France, the Allies signed an armistice with Germany. At 11am that day, the ceasefire came into effect, finally ending the war. 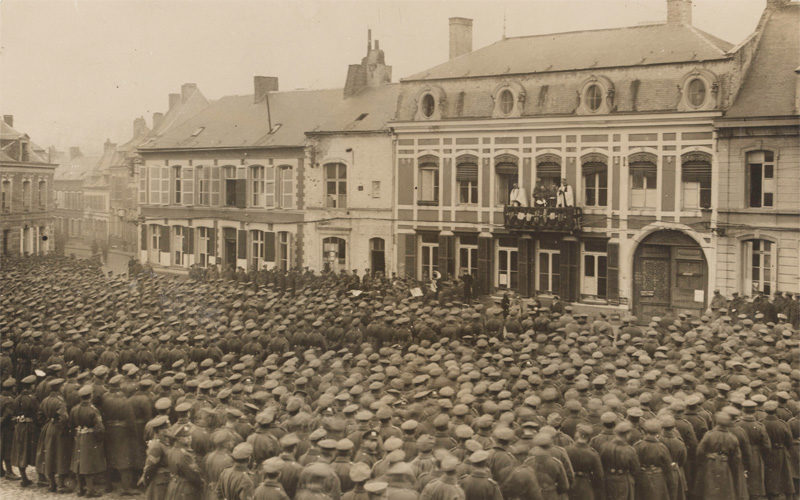 Peace came at a huge price. 1918 was the most devastating year on the Western Front. The mobile warfare since March had cost each side over a million men.

Noel’s parents travelled to France to visit him in hospital. However, on arrival they were informed that their son had succumbed to his wounds in the early hours of Armistice Day.

The letters of his family express their deep sorrow at the tragic timing of Noel’s death.

‘It has been the hardest week to bear of my life… the uncertainty of the dear laddies’ condition. The suspense at the last moment when we reached the hospital and the crushing words of the matron “I’m afraid I have bad news for you”. We were too late. He had passed away on Monday morning in the early hours, strange to say just about the time the armistice was signed! We had not left London then, and we travelled all the way hoping for the best till the hospital was reached! Then we were told he had already been taken up to the cemetery and that the funeral would be at 1.45 pm – we had to rush back to Rouen (about 3 miles) and take a car (another 3 miles) in another direction and out into the country. We reached the cemetery just in time. There were 2 other officers and about 20 privates buried at the same time. Noel was carried by five soldiers and five officers marched at the side… 3 volleys were fired and the “Last Post” sounded at the end. And there we have left our dear high-spirited laddie, who loved everybody and I believe was loved by all… It is such hard lines that he should have been taken at the very end of the war.’ 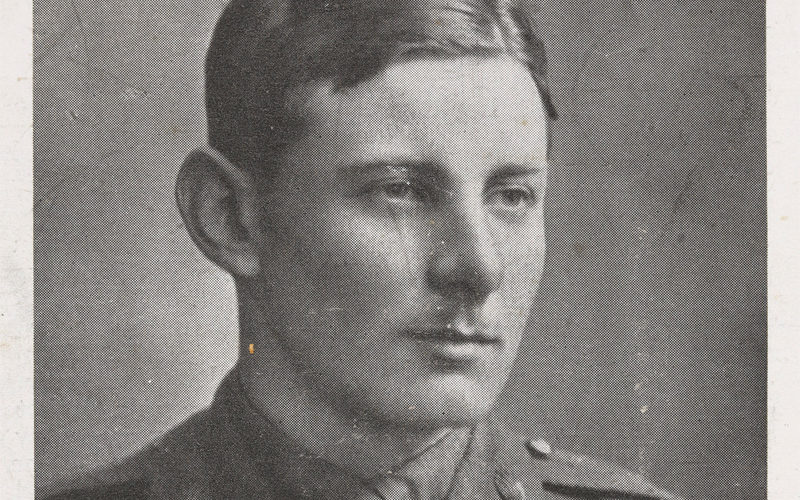 Noel was buried in a cemetery near Rouen along with 30 of his comrades. Against the backdrop of the victory celebrations, his heart-broken family headed back to Britain to mourn.

‘To think that we shall never see his dear smile again. It’s all been so cruelly hard… all the horrible noise and crowds and rejoicing everywhere day and night, it has been a continuous nightmare and the journey back I thought never would come to an end. It was such an awful shock when we got there to be told he had already gone to the cemetery… I don’t know how to face life without him.’ 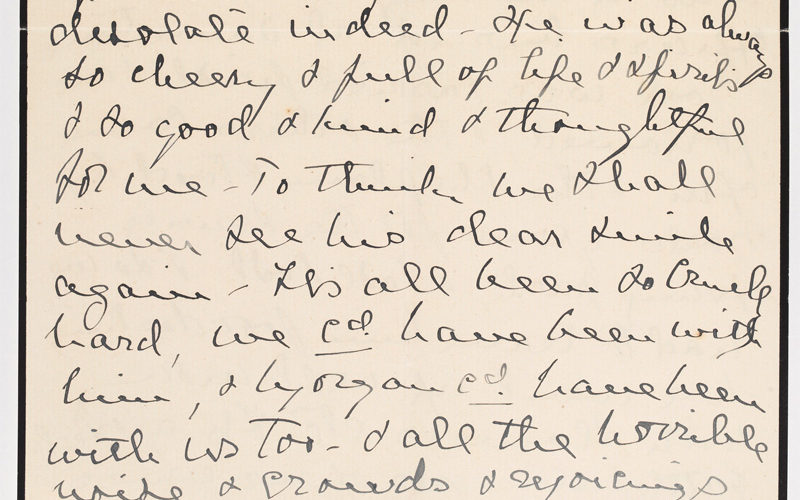 Letter from Violet Evans to her sister, 16 November 1918

Noel Everard Evans (1898-1918) was born on 26 December 1898 at Chirk in Denbighshire, the son of the Reverend Enoch James Evans and his wife Violet Evans.

Noel’s father was a vicar at St Trillo’s Church at Llandrillo-yn-Rhos (Rhos on Sea) in Colwyn Bay. His grandfather, Major Thomas Everard-Hutton of the 4th Queen’s Own Light Dragoons, had been wounded in the infamous Charge of the Light Brigade during the Crimean War (1854-56).

Noel was educated at Colet House School in Rhyl and Llandovery College. He excelled at sport, exhibiting such ability that, had it not been for the war, a professional career may well have been open to him. However, this was not to be, Like most young men of his generation, Noel was called upon to serve. 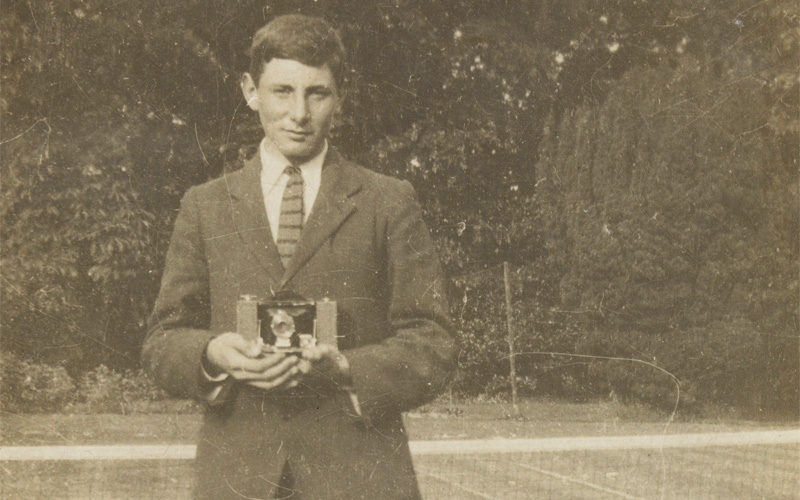 In June 1918, he was commissioned into the Royal Field Artillery (RFA). After a short period of further training, he arrived in France during September. Noel served alongside his older brother Morgan in the 27th Brigade, RFA.

Noel was laid to rest in the St Sever Cemetery Extension at Rouen. A stained glass window was erected in his memory at St George’s Church, Llandrillo-yn-Rhos. 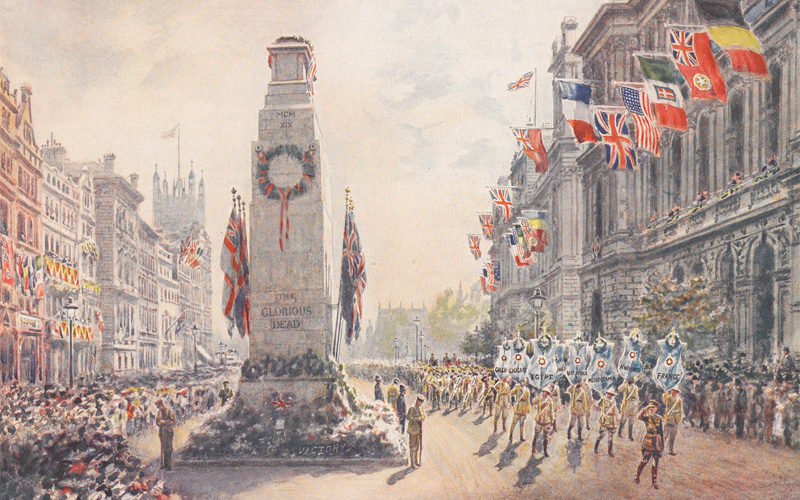 The victory parade passes the Cenotaph in Whitehall, 1919 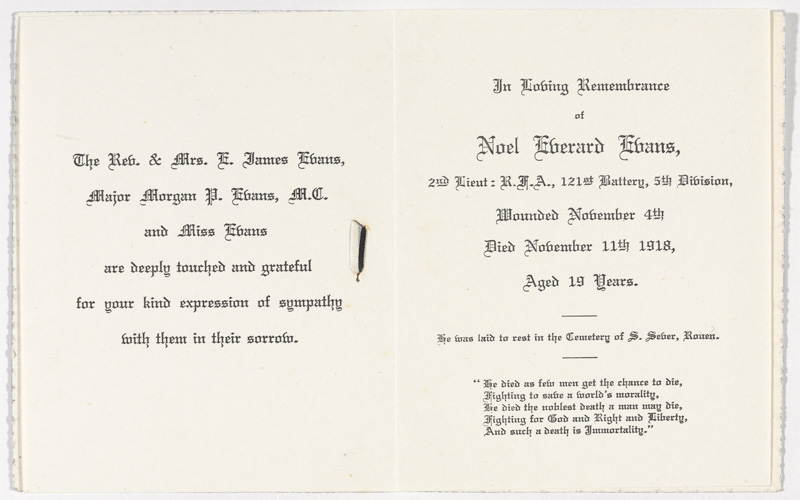 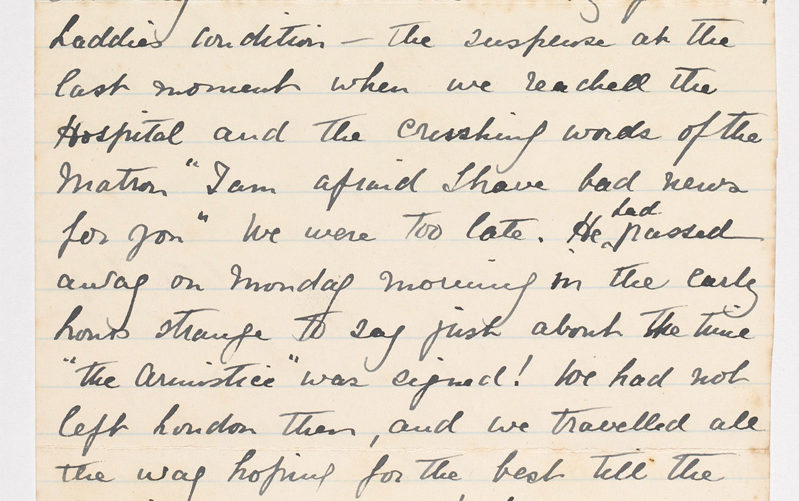 Letter from Reverend Enoch Evans to a friend, 15 November 1918 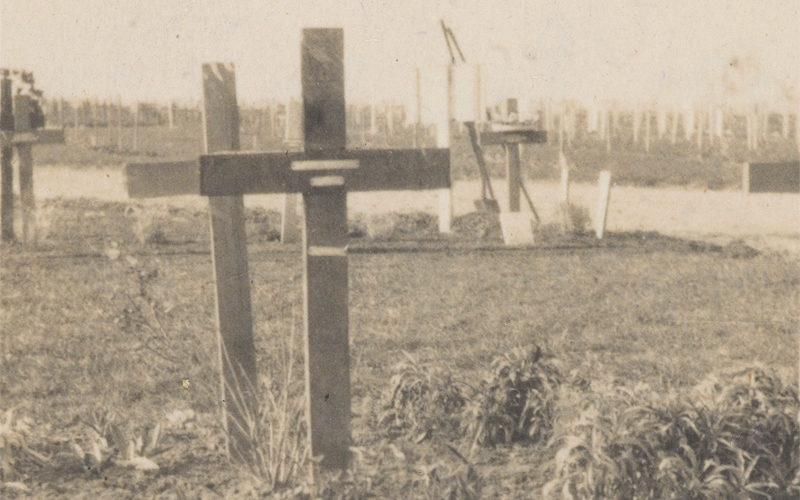 Temporary marker on the grave of Second Lieutenant Noel Evans at Rouen, 1919