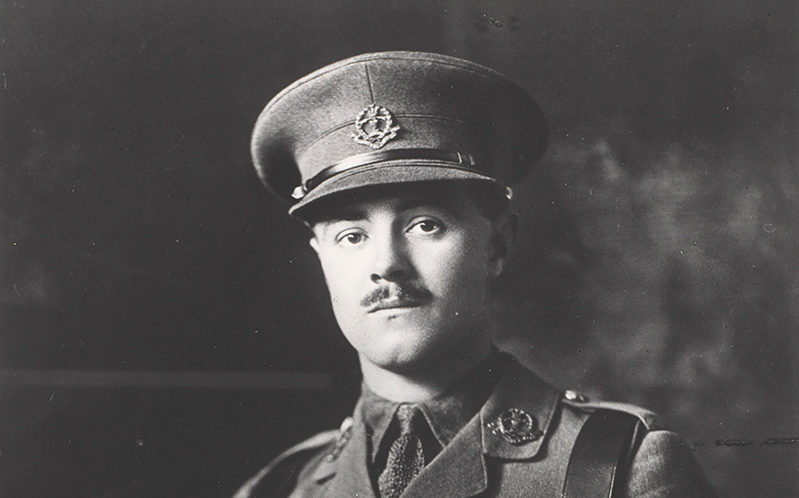 In March 1918, Acting Captain Alfred Toye found himself in the eye of the storm when the German Spring Offensive began. This attack saw mobile warfare return to the Western Front after years of stalemate. Initially, it looked like the Germans might succeed, but brave resistance by soldiers like Toye – who won the Victoria Cross for his gallantry – gradually blunted their assault.

The withdrawal of Russia from the war in 1917 released substantial numbers of German troops for use elsewhere. Aware that submarine warfare had failed to defeat Britain and that large numbers of American troops would soon be committed to the war, the Germans prepared for their final offensive in the west.

Field Marshal Haig’s divisions were all under-strength in terms of infantry. The government was unwilling to send more men to the Western Front, so Haig was forced to reduce the number of infantry battalions in his divisions from 12 to nine.

In mid-February 1918, 81 German divisions faced Haig’s 59. For the first time in three years the British had to prepare to face a major attack. Haig could not afford to give ground near to the Channel coast, so the northern sector of his front was most heavily defended. Further south his forces were more thinly spread.

General Plumer’s Second Army, around Ypres, had to hold 37km (23 miles) of line with 14 divisions. Whereas, south of Cambrai, General Gough’s Fifth Army only had 14 divisions with which to hold 67km (42 miles). 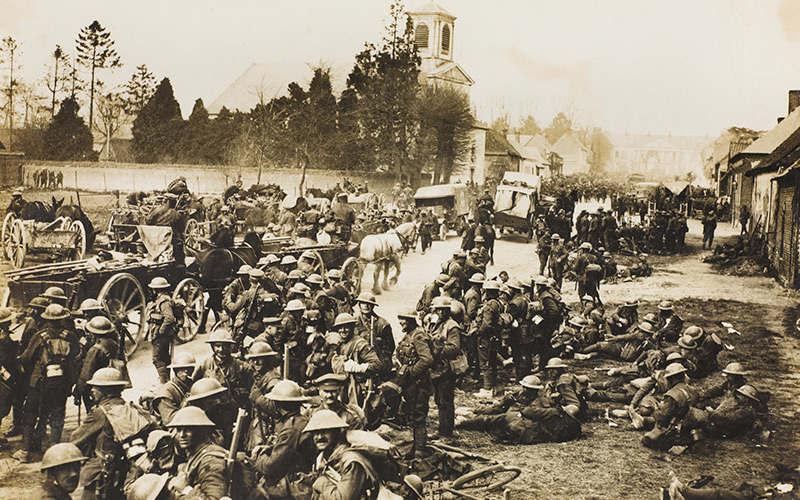 Soldiers gather at Henencourt after their evacuation of Hermies during the Spring Offensive, 26 March 1918

On 21 March 1918, the Germans launched Operation Michael. Around 10,000 guns fired over a million shells in five hours against General Byng’s Third and General Gough’s Fifth Armies. Then, 47 German divisions attacked. 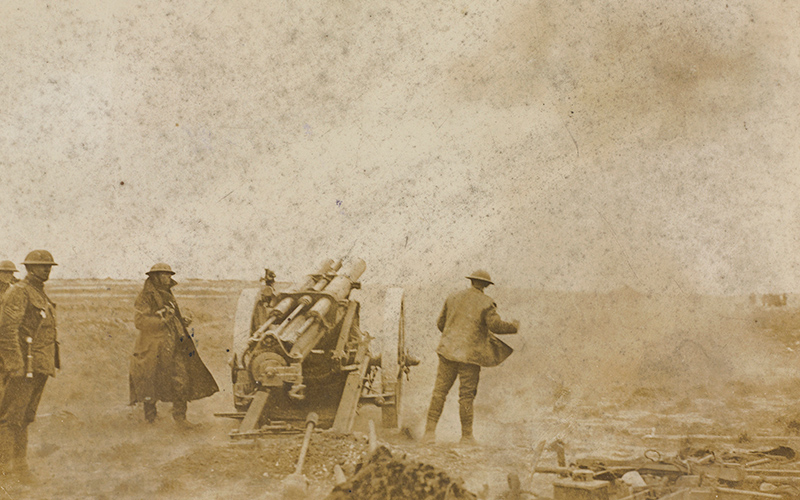 ‘The German Offensive. Our artillery in action impeding the Boche’, 1918

Heavily armed German ‘storm troopers’ then infiltrated weak-points in the line. They by-passed pockets of resistance and broke through the British trench system, leaving subsequent waves of troops to ‘mop up’ any enemies to their rear. Lacking reserves, Gough’s line soon gave way. By the evening of 23 March the Germans had advanced up to 19km (12 miles) in some sectors.

This early success belied the core weaknesses of the plan. The Germans were too exhausted to sustain the offensive and lacked the transport to convert local tactical triumphs into strategic victory. They struggled to move men, supplies and guns across the shattered landscape of the Western Front. 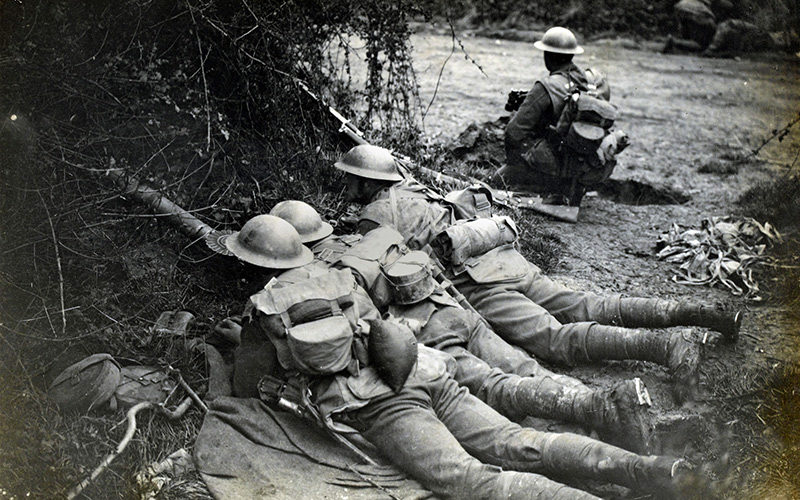 Lewis Gunners of The Duke of Cambridge’s Own (Middlesex Regiment), 1918

But, in the first few days, panic spread along some sections of the Allied front. Although many units resisted bravely, with some fighting to the last man, it nevertheless looked like the Germans might break through, reach the vital railway junctions at Amiens, split the Allies and win a stunning victory.

Early on in the offensive, in an engagement known as the First Battle of Bapaume (24-25 March), 2nd Battalion The Duke of Cambridge’s Own (Middlesex Regiment), part of 23rd Brigade of the 8th Division, was holding positions near Eterpigny Bridge and Brie Bridge on the west bank of the Somme. The lengthy section of front covered by 8th Division, along the river and adjacent Somme canal, meant that its under strength units were thinly spread.

The Germans attacked this area with several divisions and soon took the Somme crossings. The defenders were forced back by weight of numbers and began conducting a fighting withdrawal. 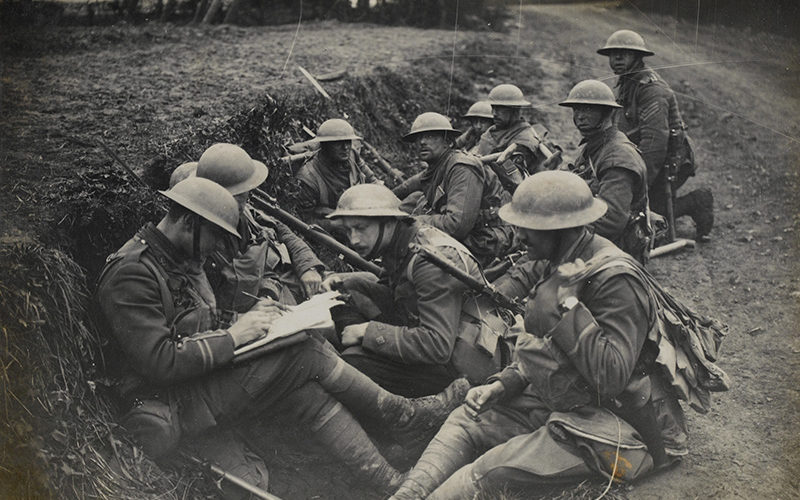 Soldiers from The Duke of Cambridge’s Own (Middlesex Regiment) rest in a ditch as their officers consult a map, April 1918

Captain Toye and part of his company found themselves surrounded, but they managed to fight their way out of Eterpigny village. They then found 70 men of the 7th Durham Light Infantry, and Toye rallied them and launched a counter-attack, holding on to the Eterpigny-Villers-Carbonnel road until the 2nd West Yorkshires came up and relieved them. A similar series of brave rearguard actions had occurred at Brie Bridge, where the Middlesex did their best to hold up the German advance.

Late on 25 March, the 2nd Battalion withdrew to trenches south of Deniecourt, having lost 12 officers and over 300 other ranks killed, wounded or captured while defending both crossings. But continued German attacks saw the retirement soon continue to Lihons, where they took up makeshift positions alongside troops of 24th Brigade. 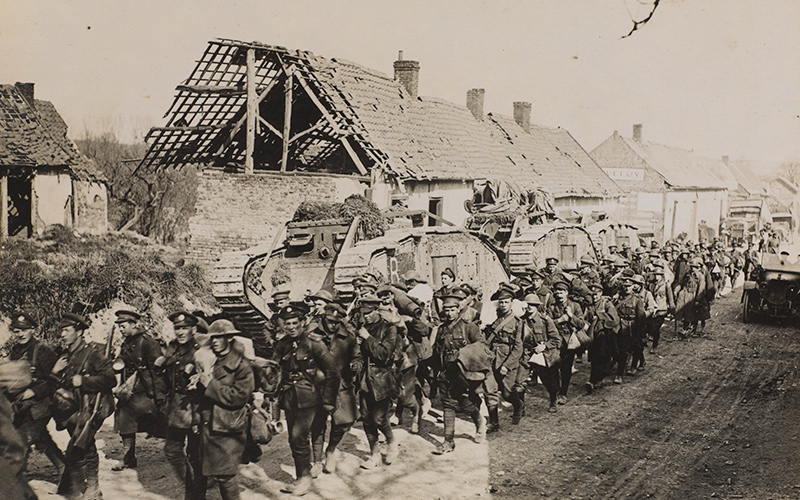 Troops passing tanks on a road in France, Spring 1918

On 26 March, in exchange for reinforcements, Haig agreed to the appointment of France’s Marshal Foch as supreme commander on the Western Front.

The subsequent Battle of Rosieres (26-27 March) saw the 2nd Battalion help repel another attack at Lihons. At one stage the enemy got within 300 yards of the Middlesex’s positions, but they held firm. The following day saw the adjacent flanking units forced back, so the 2nd Battalion was also compelled to retreat back to Caix while under attack from German aircraft.

A new line was taken up there, but the Germans soon infiltrated the village. Toye was then with his battalion headquarters, but led it against the enemy in the streets for long enough to allow another withdrawal to Castel, on the River Avre. 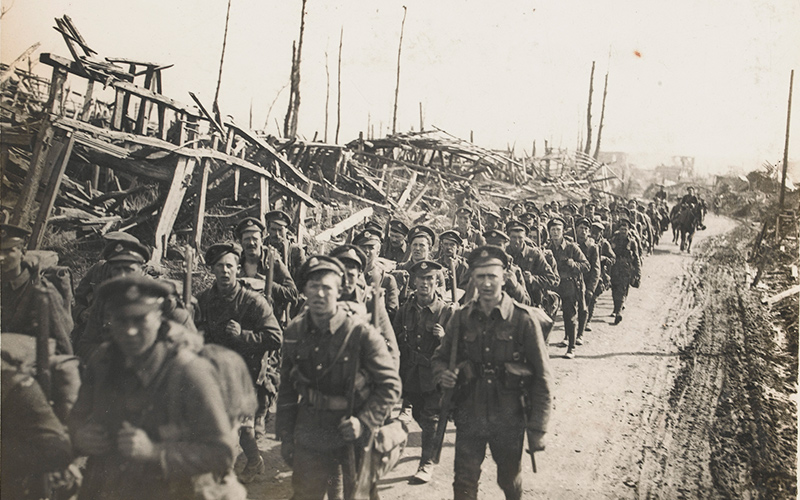 A battalion of The Duke of Cambridge’s Own (Middlesex Regiment) move up to the line, March 1918

On 31 March the remnants of the battalion, now commanded by Toye, were sent to nearby Moreuil Wood to reinforce the 2nd Devonshires. This they did, taking part in bitter hand-to-hand fighting for the next two days. On 2 April they handed over their position to new French troops and the exhausted survivors of the 2nd Battalion were withdrawn to billets in Breilly.

For his leadership and bravery during several days of intense fighting Toye was awarded the Victoria Cross (VC). His citation stated:

‘When the enemy captured the trench at a bridgehead, he three times re-established the post, which was eventually recaptured by fresh enemy attacks. After ascertaining that his three other posts were cut off, he fought his way through the enemy with one officer and six men of his company. Finding 70 men of the battalion on his left retiring, he collected them, counter-attacked, and took up a line which he maintained until reinforcements arrived.

In two subsequent operations, when in command of a composite company, he covered the retirement of his battalion with skill and courage. Later, with a party of battalion headquarters, he pressed through the enemy in the village, firing at them in the streets, thus covering the left flank of the battalion retirement.

Finally, on a still later occasion, when in command of a mixed force of the brigade, he re-established, after hard fighting, a line that had been abandoned before his arrival. He was twice wounded but remained at duty. His valour and skillful leading throughout this prolonged period of intense operations was most conspicuous’. 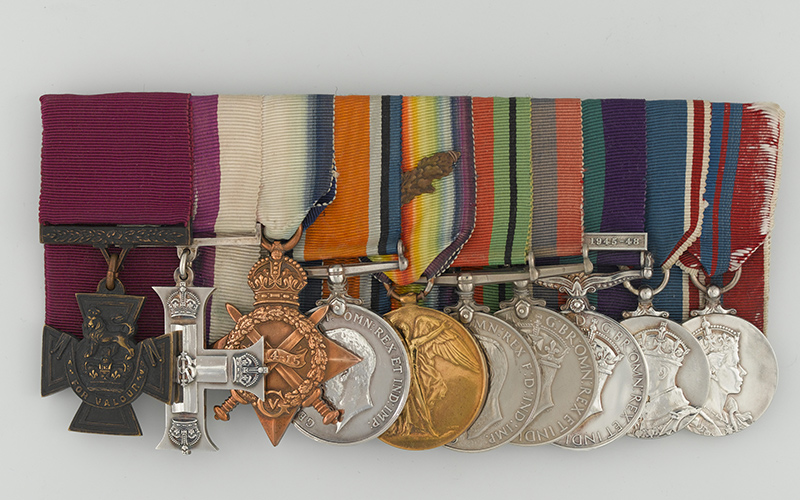 Although the Germans had advanced as much as 64km (40 miles), by 5 April their advance began to run out of steam and they were held east of Amiens. Total British losses were 178,000 men. The French, who became engaged as the battle developed, lost 77,000 and the Germans 240,000.

On 7 April the Germans tried again with a smaller offensive south of Ypres. Operation Georgette (or the Battle of the Lys, 7-29 April) captured the Messines ridge and much of the Passchendaele salient. But once again the German attack lost momentum. 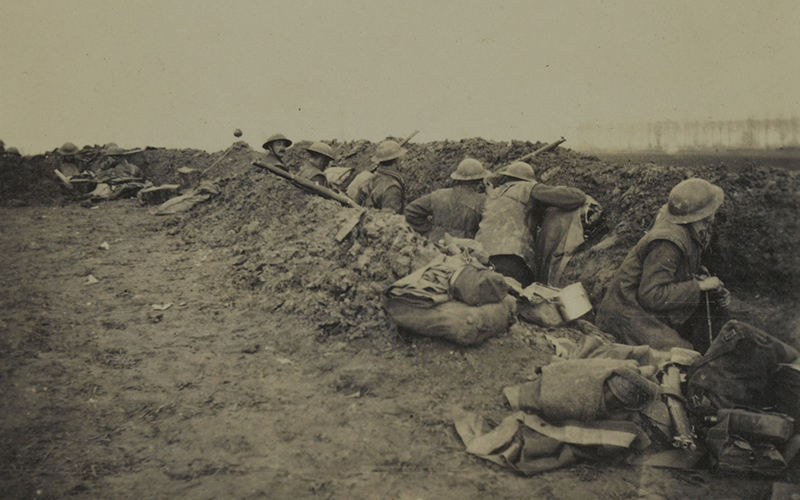 Troops of 4th Battalion The Worcestershire Regiment resisting the attack on the Lys, April 1918

Although they tested the French with a series of offensives further south between 27 May and 17 July, the Germans had shot their bolt. German morale began to crumble and on 18 July the French launched a counter-attack on the Marne, forcing the Germans back.

Germany’s attempt to break through had exhausted its army and the initiative passed back to the Allies. The stage was now set for the Allied counter-offensives of the summer.

His parents were James Robert Toye and Elizabeth Charlotte Toye (née Dodds) and his father worked for the Army as a civilian clerk. By that time, there were four children living at home – William 16, Ethel eight, Alfred, three, and one-year-old Henry.

Alfred was educated at the Garrison School, Aldershot. A keen Boy Scout in his youth, he was the first member of his troop to become a King’s Scout. In 1912 Alfred left home to join the Royal Engineers’ Boys Battalion as a bugler. After being stationed at the Curragh in Ireland, he was sent to the Cadet School at Blendecques near St Omer in the spring of 1916.

Toye was commissioned the following year as a second lieutenant with 2nd Battalion The Duke of Cambridge’s Own (Middlesex Regiment). For his gallantry on 31 July 1917 at the Third Battle of Ypres (1917) he was awarded the Military Cross. By spring the following year he had been promoted to acting captain. 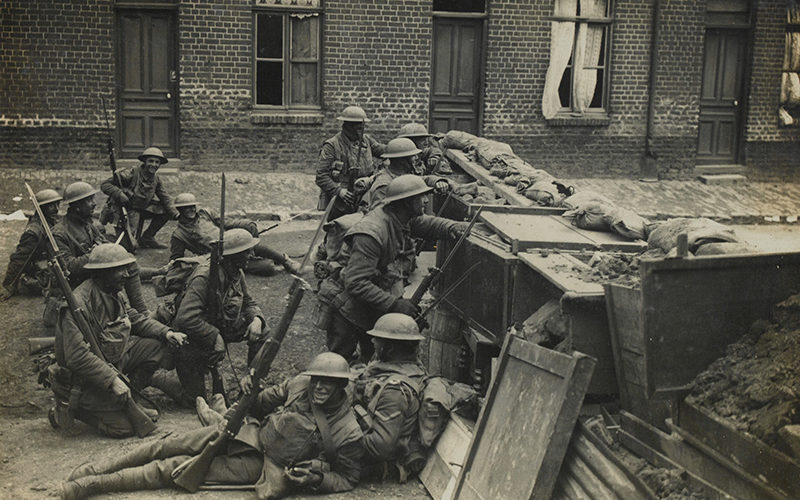 Soldiers from The Duke of Cambridge’s Own (Middlesex Regiment) at a street barricade, Spring 1918

Toye was decorated with the VC by King George V on the Queen’s Parade at Aldershot on 8 June 1918. A week later he married Flora Robertson at nearby St Michael’s Church. The couple later had a daughter, Enid Audrey Toye, who was born in 1925.

After the war, Toye briefly served in northern Russia and with the Middlesex Regiment as part of the Army of the Rhine in Germany. From 1925 to 1932 he was chief instructor at the Royal Egyptian Military College.

Toye later served as Commandant of the War Office Schools of Chemical Warfare (1940-42), before serving with 6th Airborne Division and then with General Headquarters Middle East. He retired with the rank of brigadier and later settled at Tiverton in Devon.

Alfred Toye died on 6 September 1955 at The Madame Curie Memorial Foundation, Tidcombe Hall, Tiverton. He was buried at Tiverton Cemetery.