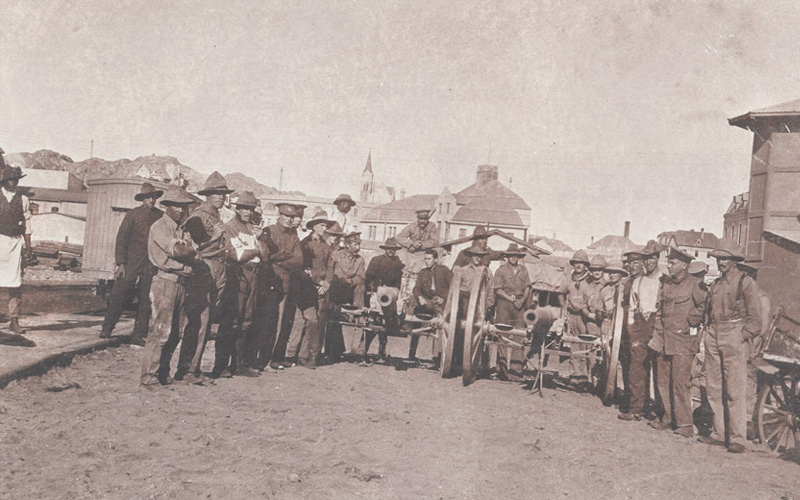 On 9 July 1915 enemy forces in German South-West Africa (now Namibia) surrendered to the Allies. This marked the final stage of a short but successful campaign of manoeuvre fought in extremely harsh conditions.

Undertaken by South African colonial troops, the campaign was aimed at preventing the German navy from using the colony’s ports. There were also several powerful radio transmitters in South-West Africa that could be used to direct naval raids against British shipping.

South African soldiers were mobilised along the southern border of South-West Africa in August 1914 and the port of Lüderitz was quickly occupied by 1,800 troops on 18 September.

Further operations were delayed by a revolt in South Africa among disaffected Boers, unreconciled to their defeat by the British in 1902. However, frontier skirmishes continued, including a German victory at Sandfontein on 26 September 1914, and a German invasion of the South African enclave of Walvis Bay on Christmas Day.

One of those involved in these minor engagements was Major John Montgomery of the 1st Mounted Rifles (1st Natal Carbineers). In December he wrote to his family in Britain:

‘My merry men have to patrol out a good distance to our front and we have posts on the flanks a good way out. It is very hot in these parts and where we patrol is one of the hottest places in this hot country. Our Sabbath morn was disbanded by aeroplanes dropping bombs on this camp… but fortunately did no damage.’

A few weeks later, he continued:

‘Just back from the front where we got into action against the sausages, plenty of lead flying about but it was only a small affair in connection with a reconnoitering party… The rebellion rather delayed matters and it would be no good our moving forward until the others are ready.’

The rebellion to which Montgomery alluded had been initiated by Lieutenant-Colonel Manie Maritz and several other officers. After issuing a proclamation calling on the Boer population to rise up against the British, they gathered a force of about 12,000 rebels in the Transvaal and Orange Free State.

The pro-British government declared martial law and forces under the command of Generals Louis Botha and Jan Smuts defeated them on 24 October 1914. The rebellion was effectively over by early February 1915.

Montgomery, who had been in South-West Africa when the revolt started, wrote to his sister that:

‘The Union rebellion has been rather a bother at this stage, but it has given us the opportunity of seeing who’s who which is a great thing and it has helped us indirectly by causing the quick mobilisation of a large army of loyalists who otherwise might not have been inclined to volunteer for service and I hope when the rebellion is stamped out, these men will be available for assisting here in German South-West Africa.’

Montgomery was correct. In late February 1915, a largely volunteer force of 60,000 South Africans, moving in four columns, finally began moving again into enemy territory. To face them the Germans had around 6,000 colonial soldiers.

The prime minister of South Africa, Louis Botha, organised an attack from several directions, including a landing of troops at Swakopmund. Using fast-moving mounted units that made wide outflanking thrusts, Botha succeeded in confusing and dividing the small defending force. This was despite encountering some strong resistance, as well as being delayed by mines and water shortages caused by poisoned wells.

‘I took two Troops… to Hofenfels… the few Germans who were there cleared out on our approach after firing a few shots at long range. It was a nice outing… we captured a large quantity of stores and burnt what we could not carry away… We are all keen on getting forward… Once we start I think we will move rapidly as all the forces will push on simultaneously.’

The advance continued. By April Montgomery wrote that:

‘The Germans did not oppose us after all their trenching and mine laying, we lost a few animals and one or two officers were touched by splinters but otherwise all secure… Every railway has been blown up and most of the wells poisoned.’

The decisive battle of the campaign was fought at Gibeon on 27 April 1915. The Natal Carbineers lost two men killed in this engagement, but Montgomery was Mentioned in Despatches by Brigadier General Duncan McKenzie, commander of Central Force, ‘For service in pushing home the attack and pursuit of the enemy at Gibeon’.

The following month the capital Windhoek was occupied, by which time most of the country had been conquered. On 3 May Montgomery wrote:

‘Here we are in the middle of German South-West Africa resting our horses and ourselves after our trek of 200-odd miles and our fight on the 27th April when we captured 2 guns, several Maxims, 200 prisoners and thousands of sheep and cattle… It is doubtful we will link up with General Botha’s force at Windhoek as an armistice has been on since noon yesterday and I should say that it means the beginning of the end. Several regiments have already been sent back… everything from the Union up to and beyond Windhoek is in our hands.’

The Germans were gradually squeezed into the north-west corner of the territory. Defeated at Otavi on 1 July 1915, they finally surrendered at Khorab eight days later. The victory had been won with a minimum of casualties and was one of the first major Allied successes of the war.

John Willoughby Verner Montgomery (1869-1968) was born at Brantford, Ontario in Canada in 1869. He was the son of Captain Alexander Nixon Montgomery of the 7th Regiment of Foot (Royal Fusiliers) and Istere Alicia Montgomery (née Atrutl) of Gibraltar. John was the eldest son among nine children.

His family later settled near Pietermaritzburg in South Africa where his father joined the Natal Native Contingent. John was educated at Hilton College in Natal and joined the Natal Carbineers in 1888.

He went on to serve during the Boer War (1899-1902) as a non-commissioned officer but was eventually commissioned as a lieutenant in the Composite Regiment formed from the Natal Volunteers. He was mentioned in Lord Roberts’s despatch of 23 June 1902.

He later served with the Carbineers during the Zulu Rebellion (1906). He took part in the Battle of Mhome Gorge on 10 June, which marked the end of the rising. Montgomery then farmed at Ismont, Mid-Illovo, Natal, but he and most of his family subsequently moved to Britain, settling at Sharnbrook near Bedford.

Montgomery later returned to farming in Natal. On the outbreak of the First World War his regiment was called to the colours on 8 August 1914 for service in German South-West Africa, where its two battalions landed at Lüderitz.

At the conclusion of the South-West African campaign, many members of the Natal Carbineers elected to serve with other units in Europe or East Africa, but Montgomery remained in South Africa. He eventually became a Companion of the Distinguished Service Order for his services (London Gazette 22 August 1918).

Montgomery’s wife gave birth to a son on 15 April 1918. He ended the war as temporary lieutenant-colonel commanding the Carbineers.

In later years he continued to farm at Ismont and was appointed honorary colonel of the Carbineers in 1952. He died in April 1968 at the age of 99. 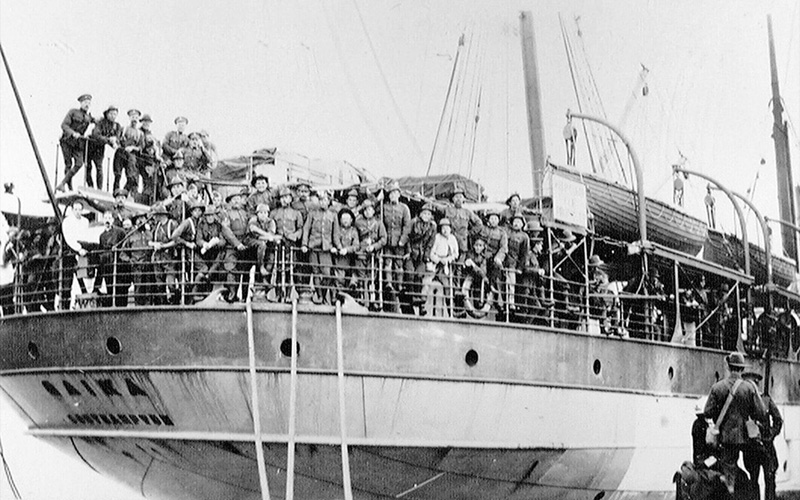 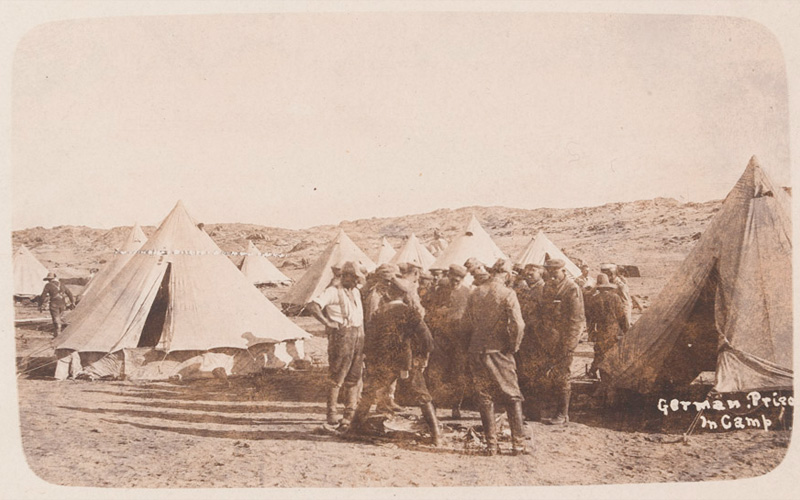 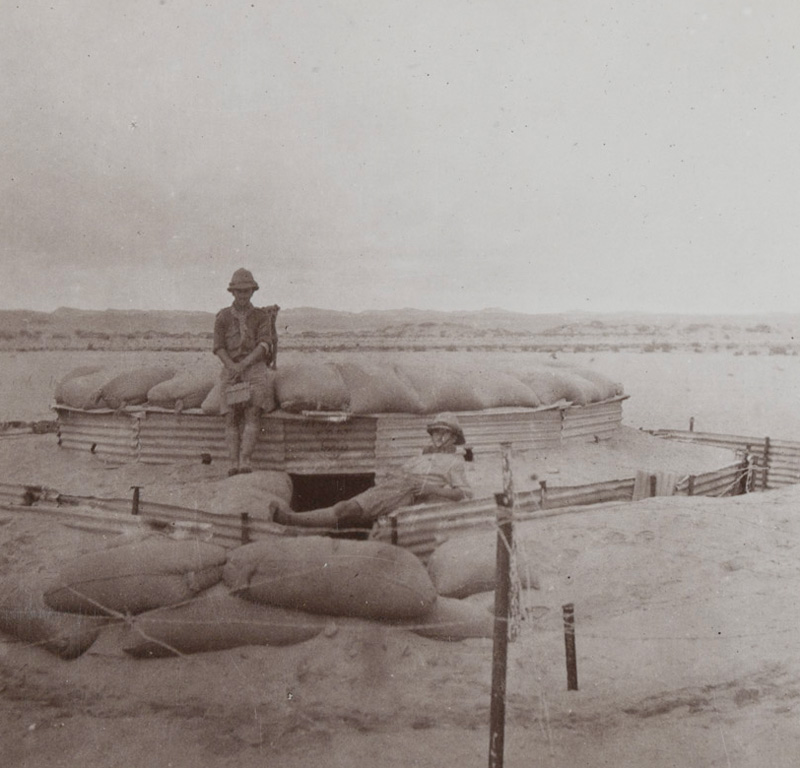 A sand blockhouse in the South West African desert, 1914 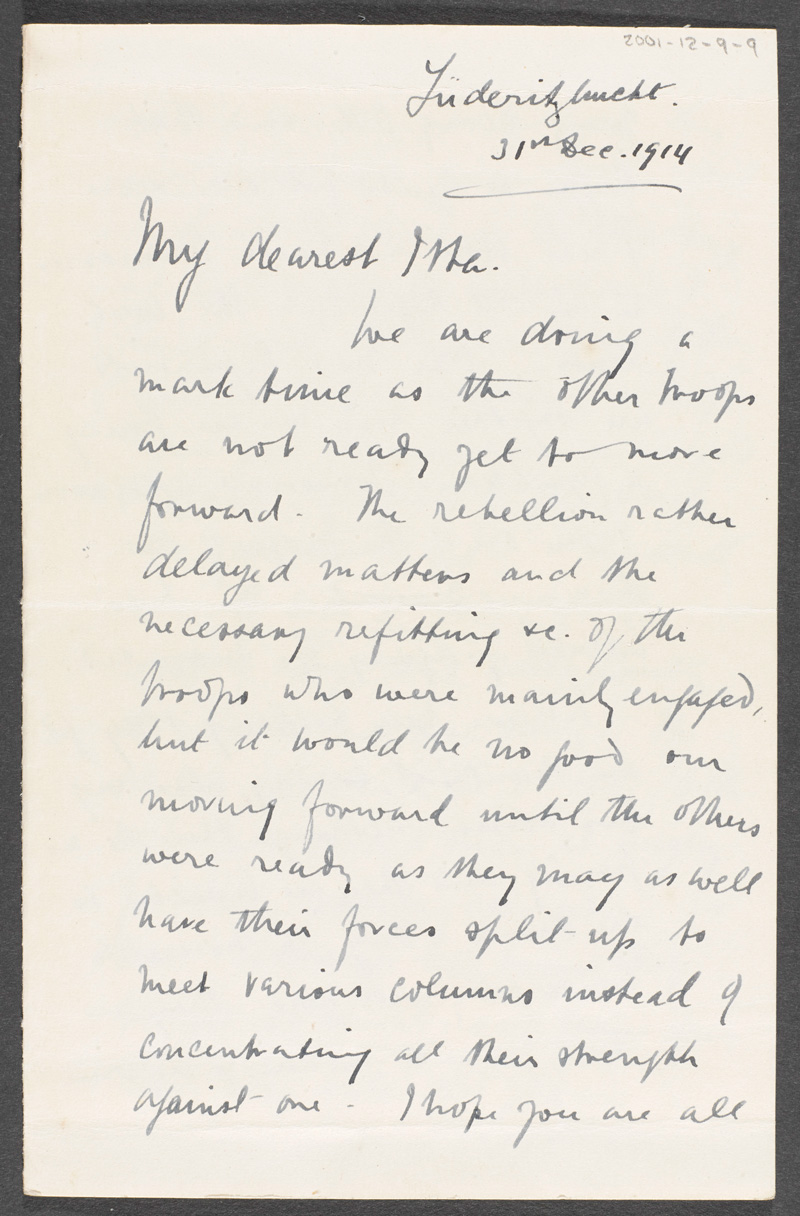 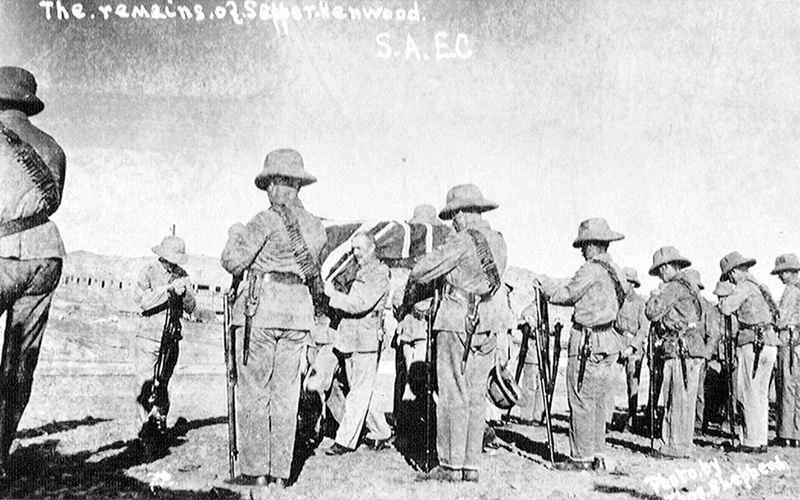 Members of the South African Engineer Corps bury a comrade, 1915 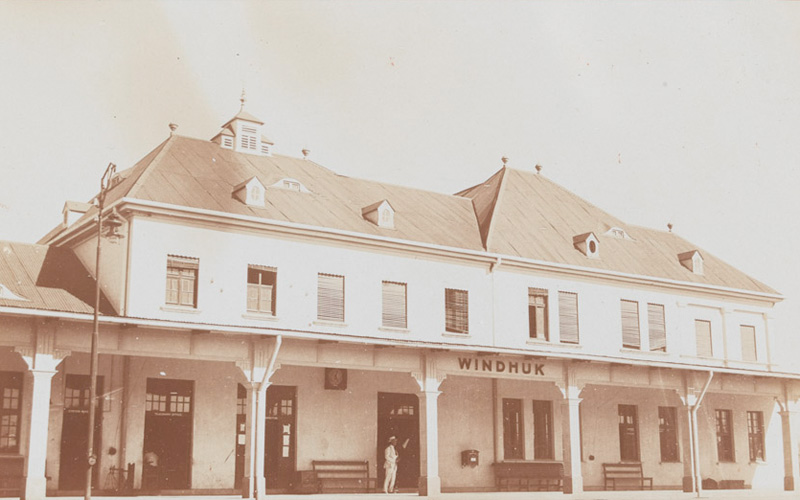 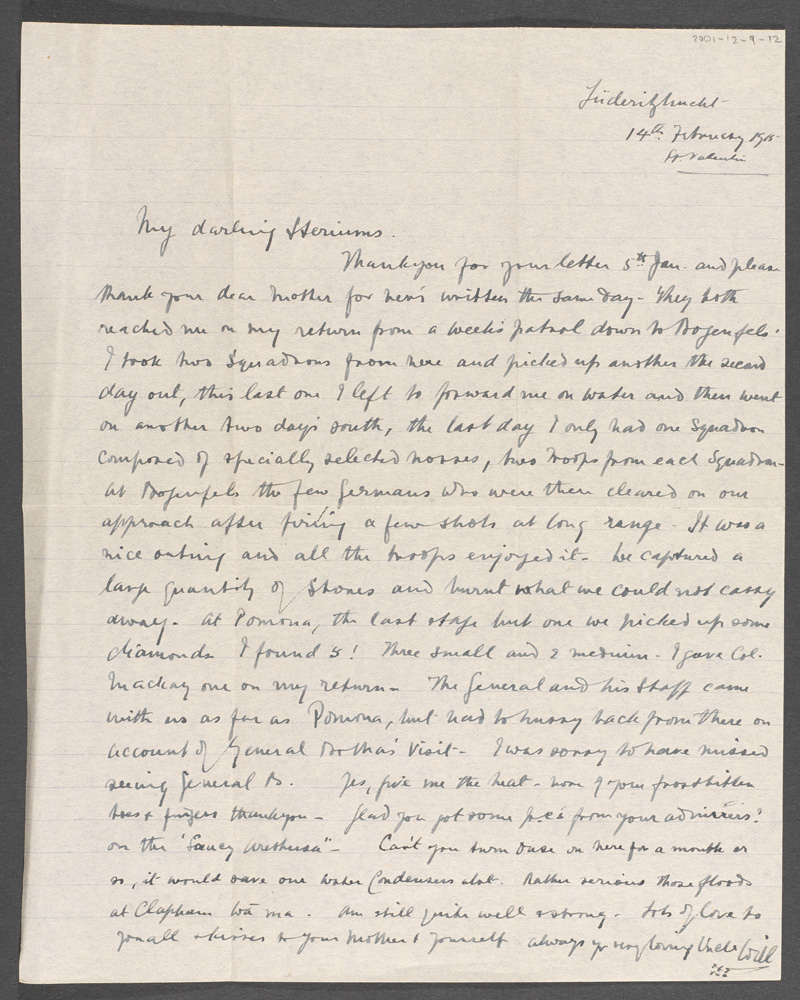 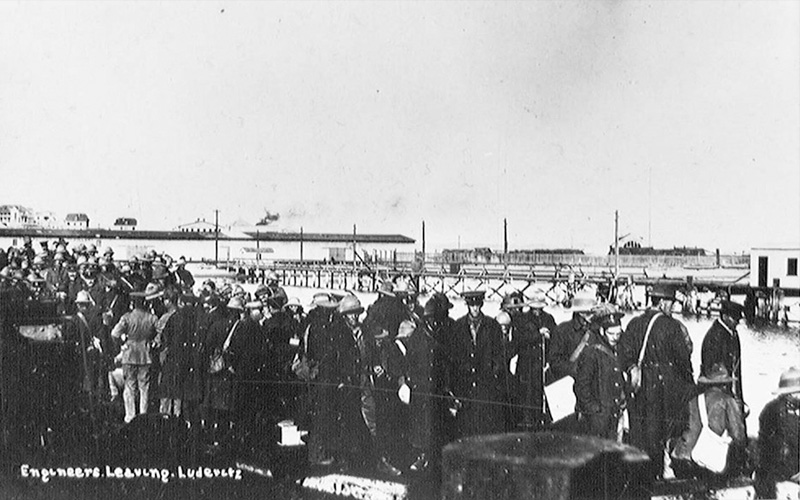 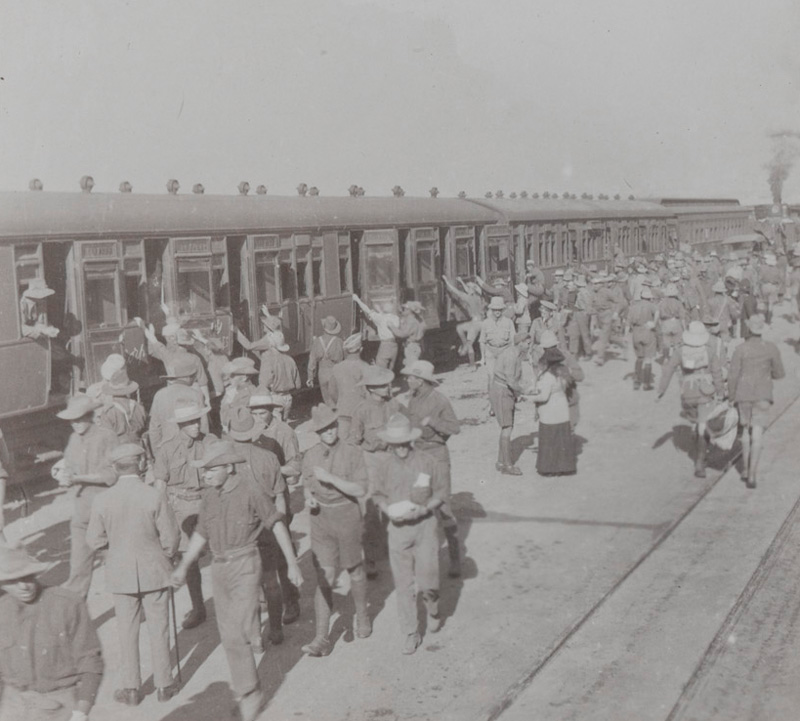 'Rifles back from Windhoek entrain at Cape Town for depot to re-volunteer for East Africa', 1915