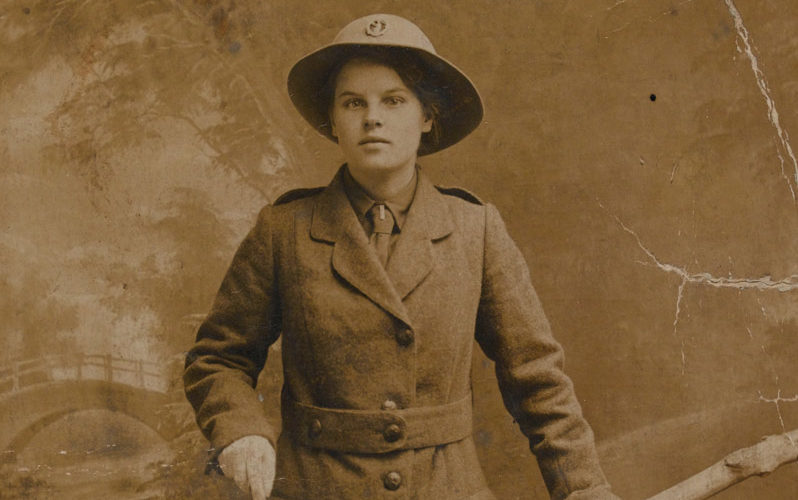 On 31 March 1917, the first servicewomen of the newly formed Women’s Army Auxiliary Corps arrived in France. Here we display medals and other objects associated with one of these pioneers, Margaret Caswell, who helped form the basis of women’s service in the British Army.

On 31 March 1917, the first group of women from the Women’s Army Auxiliary Corps (WAAC) arrived in France under the command of Assistant Controller Helen Gwynne Vaughan. Among their number was Margaret Caswell, a young volunteer eager to contribute to the war effort.

Another of this first group was Emmy Gaunt. She later wrote:

‘All the preliminaries completed, we duly received embarkation orders to proceed to Victoria Station, there to take the Continental Boat Train to Folkestone, and thence to Boulogne – the first draft of khaki-clad members of the Women’s Army who were destined for the duration to do their bit side by side with the soldiers.’

The WAAC had been formed earlier that year to free up valuable and experienced soldiers for front-line service. Women were employed in a variety of jobs. As well as cooking and waiting on officers, they served as clerks, telephone operators, store-women, drivers, printers, bakers and cemetery gardeners. 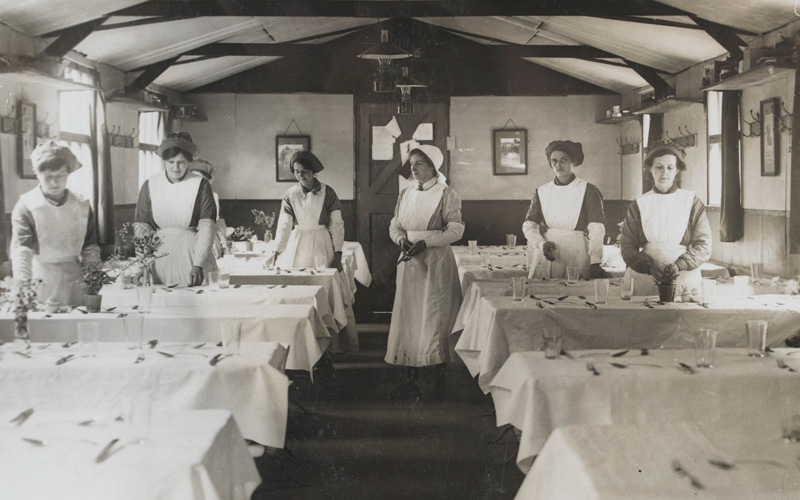 A shock for some men

On arriving in France, Vaughan began to organise the women into these various roles. She proved an able administrator despite the obstruction of some of her male colleagues. She later wrote:

‘I discovered that the objection to the employment of women was almost universal. The services, of all professions, had naturally the least experience of working with women, they knew little of the extent to which, even then, men and women were working easily together, they mistrusted the complications which the influx of a large body of women might entail, they disliked the intrusion into their offices and workshops of an alien element.’

The WAAC had a different command structure to the rest of the army. Officers were called ‘officials’ (administrators and assistant administrators), non-commissioned officers were referred to as ‘forewomen’, and other ranks as ‘workers’. So, in name at least, the WAAC resembled the factory structure familiar to many women at home, rather than a military formation.

On 9 April 1918, the unit was renamed Queen Mary’s Army Auxiliary Corps (QMAAC) in honour of their work, especially their brave conduct during the German’s Spring Offensive the previous month.

Their contribution was also much appreciated by the men they served with. On 13 May 1918, Private Thomas Fuller wrote home: ‘The WAACs can cook much better than the old Army cooks used to, so we shall miss them when we get to a battalion up the line.’

Women serving in France shared the dangers of their male colleagues. Air raids on their camps and depots were frequent.

During the night of 29 May 1918, German aircraft attacked the QMAAC Camp 1 at Abbeville. One of their bombs fell on a trench shelter killing 22-year-old Margaret Caswell and eight of her colleagues, and wounding a further seven.

Worker Marjory Peacock knew one of the dead girls. She wrote of her funeral:

‘Graves in France were just long trenches so before Trixie (Worker Beatrice Campbell) was buried some of us went out into the woods and gathered daffodils and brought packets of hair pins from the canteen and went down into the grave and lined her part of it by pinning daffodils to the sides before she was buried.’ 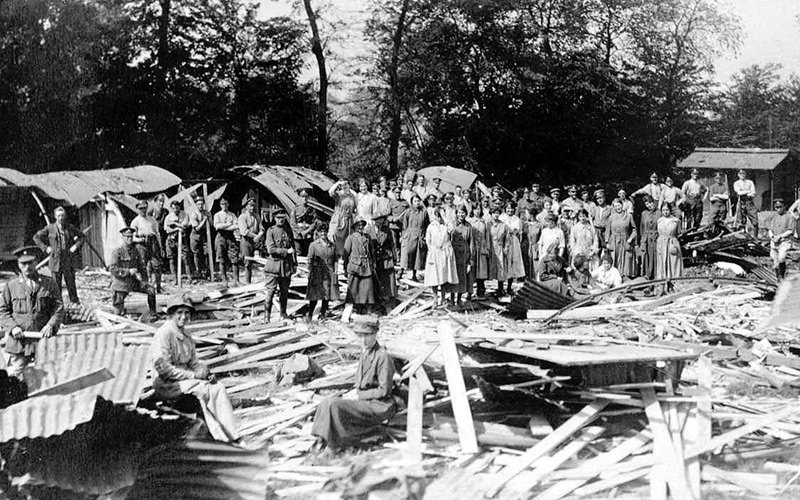 Members of the Women’s Army Auxiliary Corps clearing up after an air raid at Abbeville, May 1918

Margaret Selina Caswell was born in 1896 at Ogbourne St George, near Marlborough in Wiltshire. She was the second of ten children of Fredrick Caswell and Mary Jane Rolfe.

She grew up at 5 Lower House Cottages, Everleigh, Wiltshire. Her father worked as a farm carter. The family later moved to Hampshire, residing at Chandlers Ford in Eastleigh and then Kursley in Winchester. After leaving school in her mid-teens, Margaret assisted her mother at home.

She initially enlisted in the Women’s Legion, a unit founded in August 1915 to provide cooks, waitresses and gardeners to the army. Based in Dartford, it formed the basis of a growing force that eventually also included motor transport drivers. The latter chiefly served with the Royal Flying Corps.

Margaret later transferred to the Women’s Army Auxiliary Corps, enlisting at Tidworth in early 1917. Given the rank of worker, she was sent to France where she worked as a waitress at an officers’ club at Abbeville camp.

Margaret Caswell and her comrades were buried at Abbeville Communal Cemetery Extension on the Somme. She is also commemorated on the Chandlers Ford War Memorial. 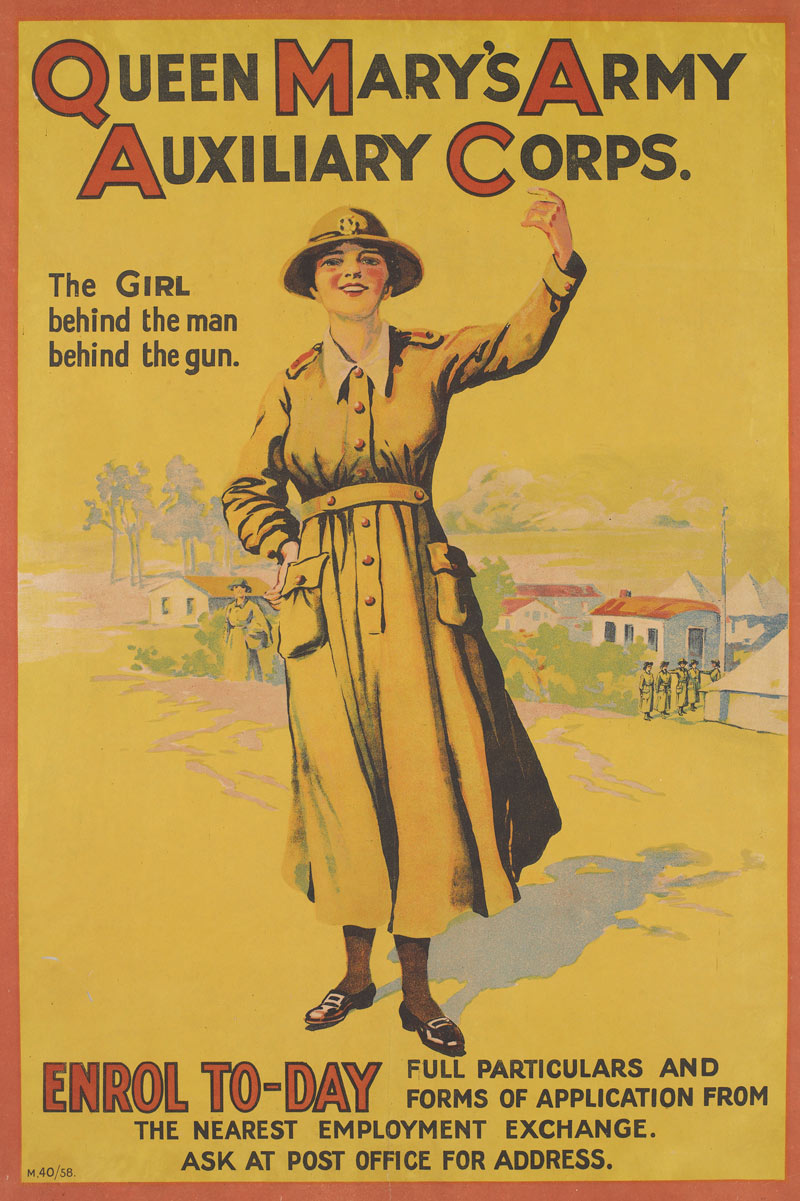 'Queen Mary's Army Auxiliary Corps - The Girl behind the man behind the gun', 1918 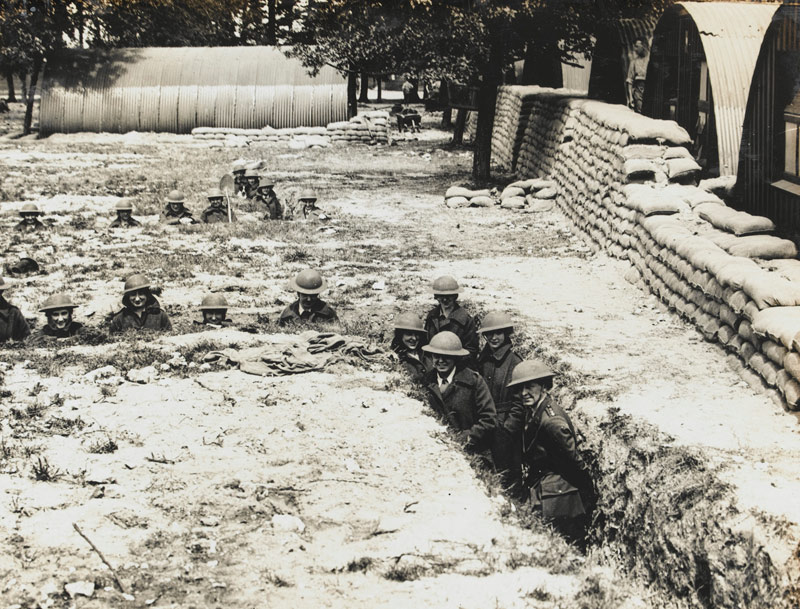 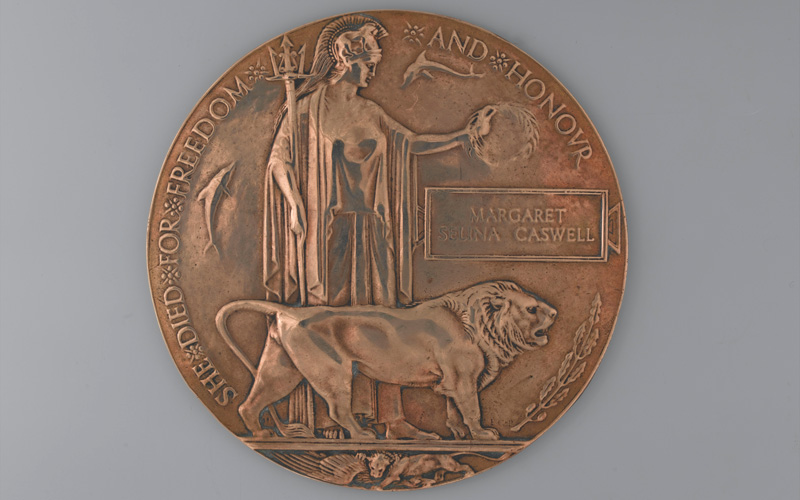 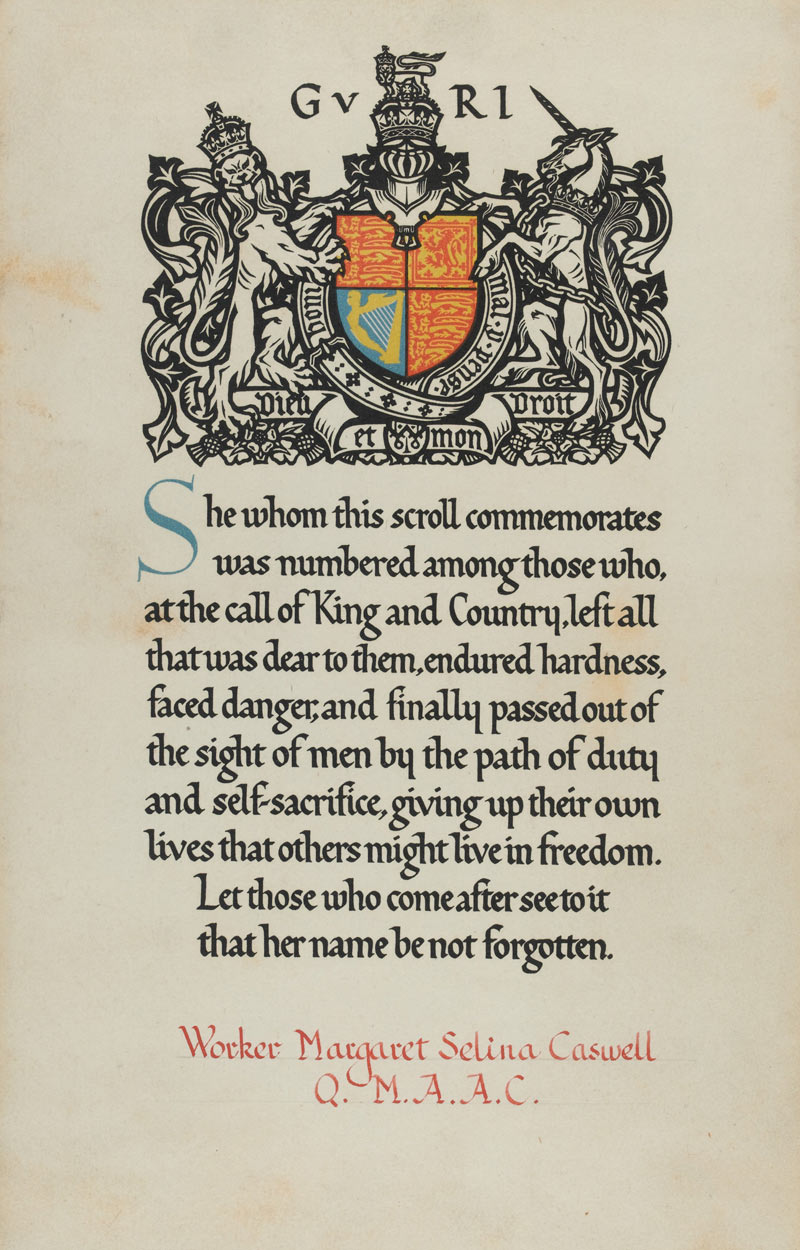 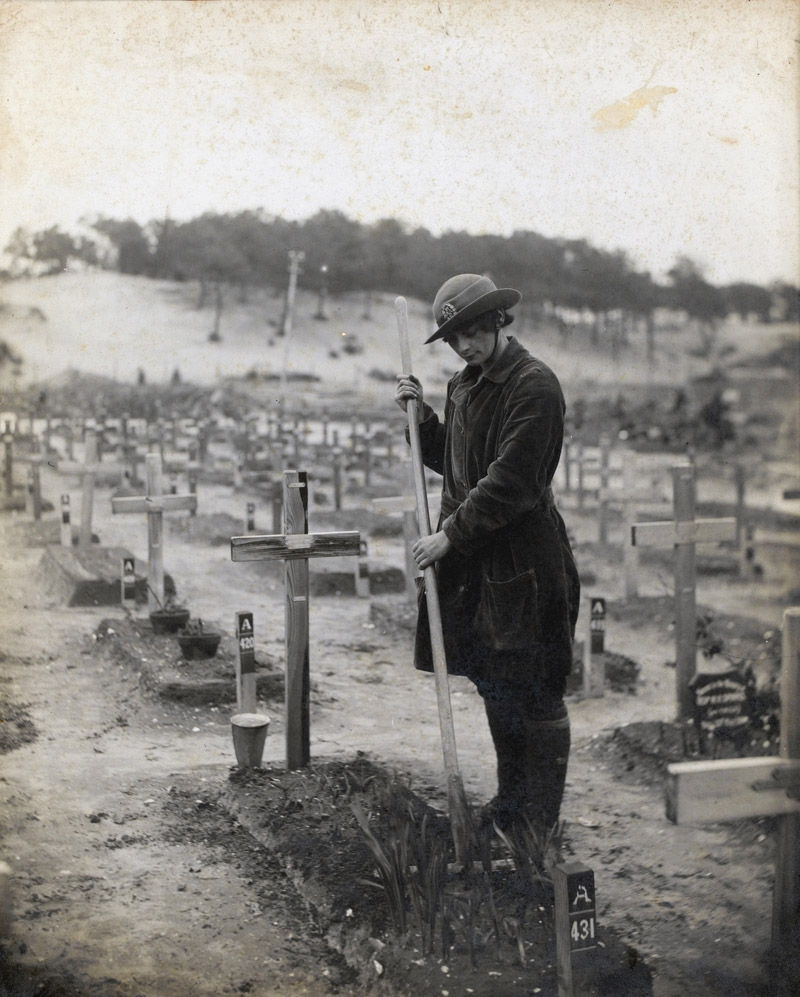 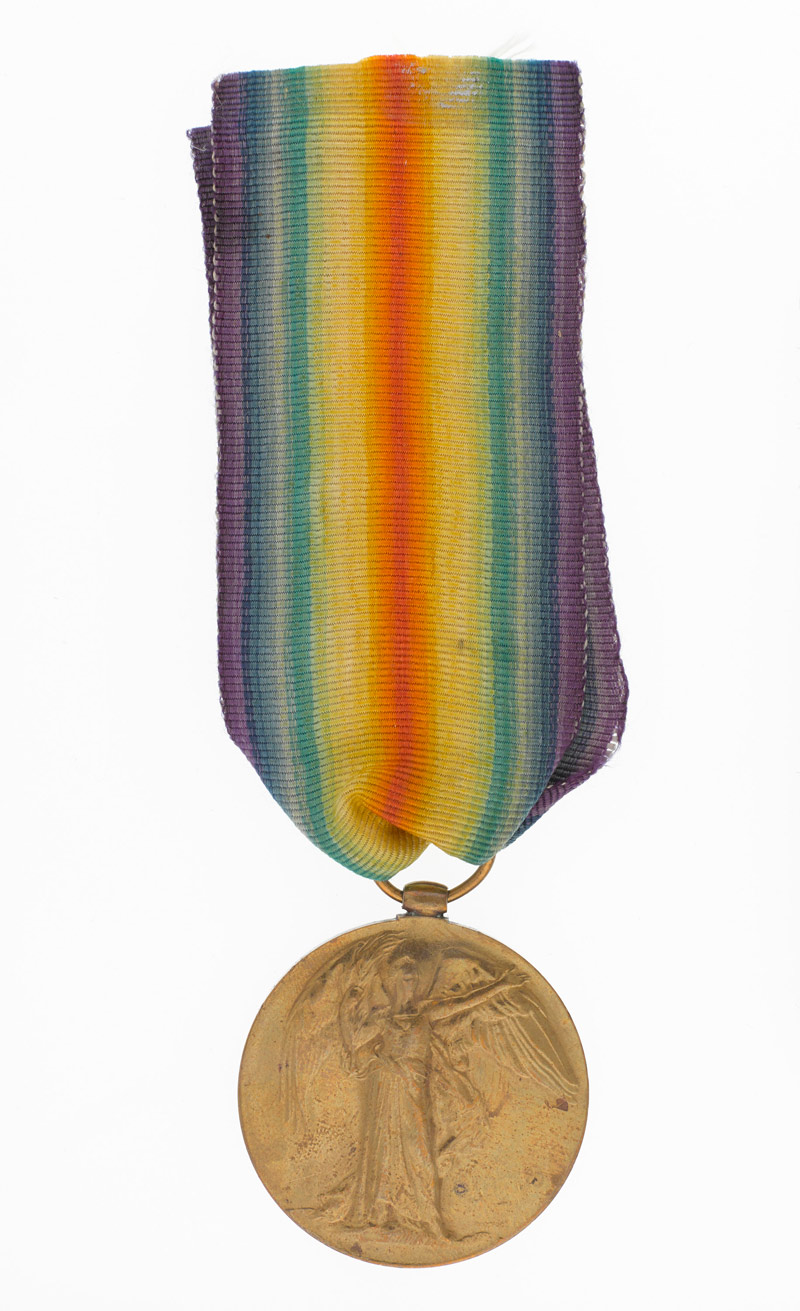