Discover the surprising and diverse range of soldiers from all over the Empire, Commonwealth and Dominions who contributed to the British First World War effort in East Africa. 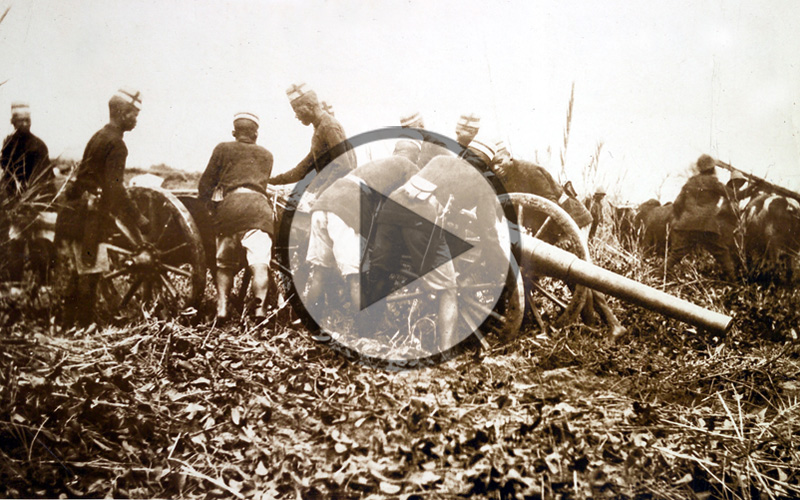 The European conflict, sparked off in Sarajevo in 1914, spread like brushfire to the colonies and dominions of the European empires. Europe’s quarrels became a World War.

The Allied strategy of blockade – cutting Germany off from food and ammunition – meant that Germany’s African colonies were a prime target. Togoland [now Togo], Kamerun [now Cameroon] and German South West Africa [now Namibia] were all captured within 18 months, but German East Africa’s [now Tanzania, Rwanda and Burundi] resistance to the vastly superior forces thrown against it was one of the most extraordinary stories of the war.

Fought across an area greater than the size of Britain, France and Germany combined, it was a war of mobility and guerrilla tactics, fought in tropical jungles and vast swamps. Lions, crocodiles, snakes and parasites were an even deadlier threat than the enemy. Disease killed thirty times as many men as combat.

Disease, the climate and environment struck the Allied soldiers down in their thousands. It was a war of long hard marches in very difficult country.

Von Lettow Vorbeck fought a guerrilla campaign and his Askaris were tough fighters who knew the land and were more resistant to local diseases. By early 1917 Britain had learnt the lesson and black African troops largely replaced South Africans, Indians and Rhodesians. It was these soldiers who formed the backbone of the British Army.

Though Von Lettow-Vorbeck’s hit-and-run tactics kept the British off balance, weight of numbers told and by Autumn 1916 his troops were confined to the southern part of the colony. In July 1917, forced into a battle at Mahiwa, they won, but with high casualties they could ill afford.

They crossed into Portuguese East Africa [now Mozambique] to capture supplies and munitions; but the war had been long and numbers were dwindling. With his enemies closing in, he crossed back into German East Africa and then into the British territory of Northern Rhodesia [now Zambia]; where, three days after the end of the war in Europe, he learned that Germany had surrendered.

The longest campaign of World War One was over. British casualties totaled 22,000, with 11,189 killed. The Germans lost 2,000 men. Both sides relied on African soldiers and even more heavily on African porters. As many as 100,000 of them died in the war.

At least 365,000 civilians also lost their lives. Few knew why the war was being fought or why their lives were devastated, but the huge contribution of African soldiers and civilians had been vital to Britain’s war effort.