A modern-day British Army soldier discusses his equipment with an interpreter kitted out as a British soldier from 1914. 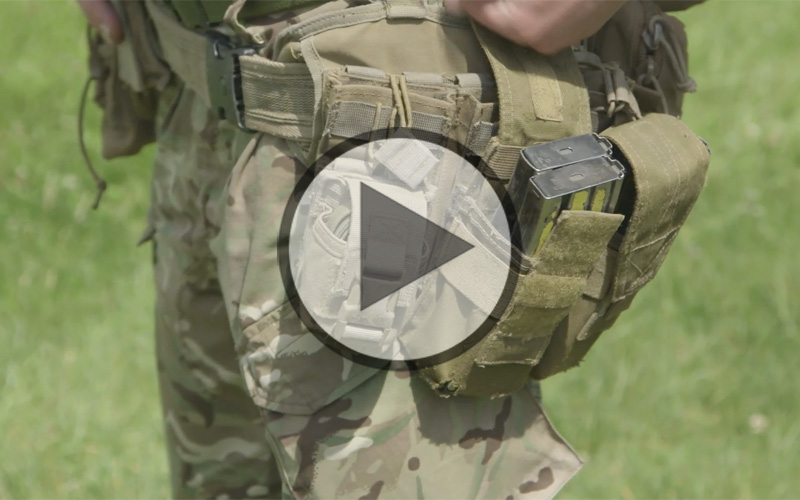 Interpreter: This is Drummer Thompson in the 2014 fighting order. Now, Drummer Thompson, I notice straight away as a soldier you don’t seem to have any ammunition pouches. A hundred rounds for me. Where are yours?

Drummer Thompson: Yeah, I’ve got 120 rounds in four magazines. As you can see, this is a Molle pouch. It’s Velcro, easy access – magazine out, onto the weapon. You’ll have full scales of ammunition in your day sack.

Interpreter: And Drummer Thompson, what about for close-quarter work? We’ve got our bayonet – 17 inches of cold steel. Have you got an equivalent?

Drummer Thompson: Yeah, it’s made of the same material. It’s a lot smaller. It’s a lot handier for going in and out of buildings, and in and out of compounds. And this is what we use for our close-quarter battle, in case our ammunition gets expended and we might need to thrust the insurgents.

Interpreter: And if the weather isn’t as nice as it is today, what about night time if it gets colder, we’ve got on our back the greatcoat in our large pack. What have you got to keep warm?

Drummer Thompson: It has changed a lot. We’ll now carry a warm kit in our day sack. It’s probably a softie suit, like a North Face jacket or something like that to keep you warm.

Interpreter: Have you got any water on you? I mean we’ve got a pint and a half of water in our water bottles there. Have you got an equivalent to that?

Drummer Thompson: Yeah, well this is a tube here. This is a CamelBak. It’s inside the day sack. We still do use the water bottle, but it’s not a metal one. It’s a plastic one. It’s a bit more tactical when you’re going into battle. It doesn’t rattle about. It doesn’t rust, as well. So we’re using a CamelBak now. It carries a lot more water, especially in the climates that we’re fighting in now.

Interpreter: And, forgive me, I can’t help but notice this protrusion appearing from above you there. What’s that?