How To Sell a War: Come Along, Boys! 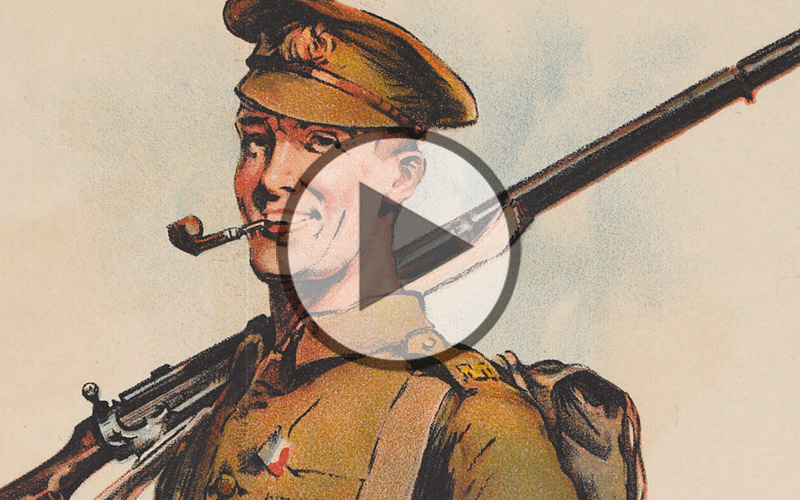 Rob Fleming: Here we see a British soldier depicted as they would have appeared in 1914. He’s wearing a khaki field uniform, one of the most advanced forms of camouflage available at the time. He’s also wearing a webbing set which allows him to carry his weight evenly over his body making it more comfortable, and he’s got a Short Magazine Lee Enfield rifle, one of the most powerful and accurate rifles available in the world. So this poster’s suggesting that if you join the British Army, you’ll become a member of one of the most professional and well organised forces on the planet at that time.

David Bownes: During the First World War there was no official government propaganda agency in Britain. Instead the British Army and the British government relied on the commercial advertising sector to provide recruiting posters like this example you see here. Many of these posters use stock images that would otherwise have been used for commercial advertising campaigns, and they can look a little bland in modern eyes. But we can also see contemporary advertising thinking in this particular poster. The viewer is expected to be able to see themselves in the image. So a lot of these recruiting posters show ordinary private soldiers, never officers, and the idea is that this is someone like you, and by joining up you’ll be amongst friends.

Farhan Urfi: The single most striking thing about this poster is the decision to wrap up a very serious message in a very light-hearted way. The way that it’s presented is very much like a class reunion, or an invitation to recruit. It’s very light-hearted and it’s very positive, and it’s an interesting approach. What it does effectively promise is a way of life that’s very positive and the harsh realities of war aren’t depicted within this image.