How To Sell a War: Send More Men! 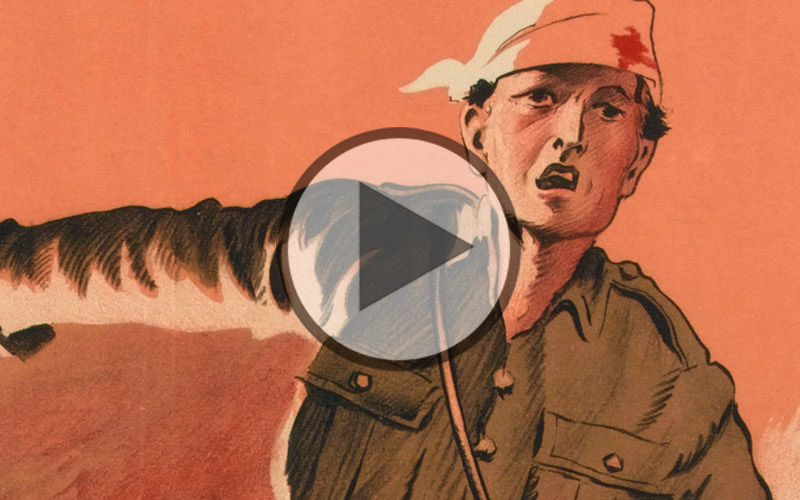 Rob Fleming: By the end of 1914 the British Expeditionary Force, Britain’s standing professional army, had been nearly exhausted by the heavy toll of fighting on the Western Front. Therefore an urgent appeal was made to bolster numbers through recruitment. Posters such as ‘Send More Men: The Sportsman’s Battalion’ were aimed at fit, young, healthy men interested in sports, who would be able to be fit enough and strong enough to meet the rigours of war. This poster’s particularly interesting because it features a motorcycle. Motorcycles and machines like this were fairly recent innovations and so it’s designed to appeal to people interested in new technology.

David Bownes: This is a very unusual First World War British poster in that it shows a soldier fresh from the heat of battle. Most posters from this time show soldiers in parade ground uniforms, happy and cheery, ready to go off and serve in France. But here a soldier has returned straight from battle. He’s wounded and is pointing earnestly to a burning village where there is a church on fire. And he’s calling direct to the audience to help him and enlist right now. There’s a real sense of urgency and jeopardy in his actions. The poster’s also interesting in what it tells us about recruiting at this time. This is recruiting for one of the so-called ‘Pals’ battalions; battalions formed of young men who worked together or who had a shared interest. In this case it would be motor sports. This particular battalion became part of the Royal Fusiliers and recruited at the Hotel Cecil, which is mentioned at the bottom of the poster.

Farhan Urfi: What this poster does really well, it captures a moment in time which in turn reflects the mood of the whole nation. It’s heroic, it’s devoted and it’s a real emotional call for help, and the fact that there’s just one soldier on there makes it even more impactful. The way that the whole thing is wrapped up is really emotional and you’d be forgiven for thinking that this is an actual film poster. And what young British man wouldn’t look at that and think, ‘I want to be the hero in that poster, and I want to be the one to help that soldier.’