How To Sell a War: Your Country’s Call 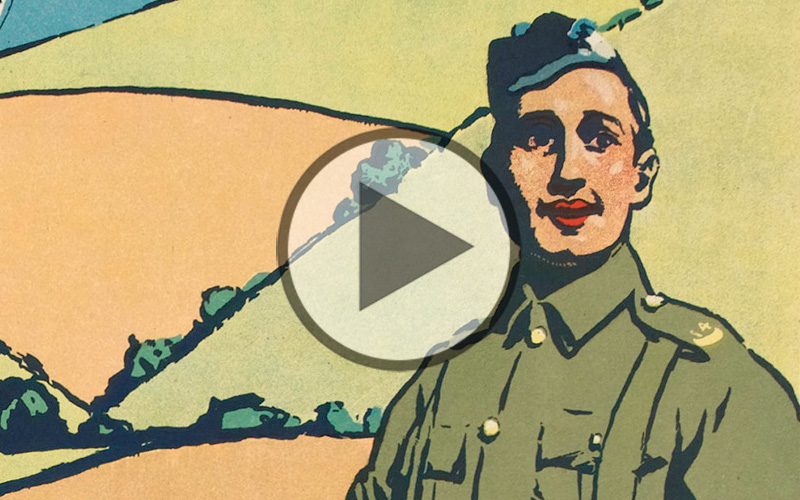 Rob Fleming: When the German Army enacted their Schlieffen Plan to cross through neutral Belgium into France, they caused severe destruction and devastation to several Belgian towns and villages along the way. These scenes of devastation featured in early recruiting posters in which you could see the Belgian landscape with smoking Belgian towns in the foreground. By contrast in ‘Your Country’s Call, Enlist Now’, we see an idyllic English landscape but protected by a British soldier.

David Bownes: Many of the early recruiting posters produced by the British government focused on the idea of serving your King and country, as in this example which shows a typically English scene protected by a Highland soldier. Highland soldiers were often used in recruiting literature because they gave both a sense of colour and also the idea of all the nations of Great Britain fighting together. In all these posters Britain is represented as being an essentially rural landscape even though the majority of young men who served came from industrial regions such as Birmingham and London.

Farhan Urfi: This poster is a real master of disguise. Whilst it looks absolutely beautiful, the landscape, beautiful colours, rolling hills, what this is really about is fear. It’s the fear of losing that kind of freedom and that freedom turning into destruction. Also the idea of being asked a question – isn’t this worth fighting for? – it’s not the Empire asking you, it’s that soldier in the poster asking you, ‘Isn’t this worth fighting for?’ And the absolute answer at that moment in time, is ‘Yes’.