Discover the surprising and diverse range of soldiers from all over the Empire, Commonwealth and Dominions who contributed to the British First World War effort at Gallipoli. 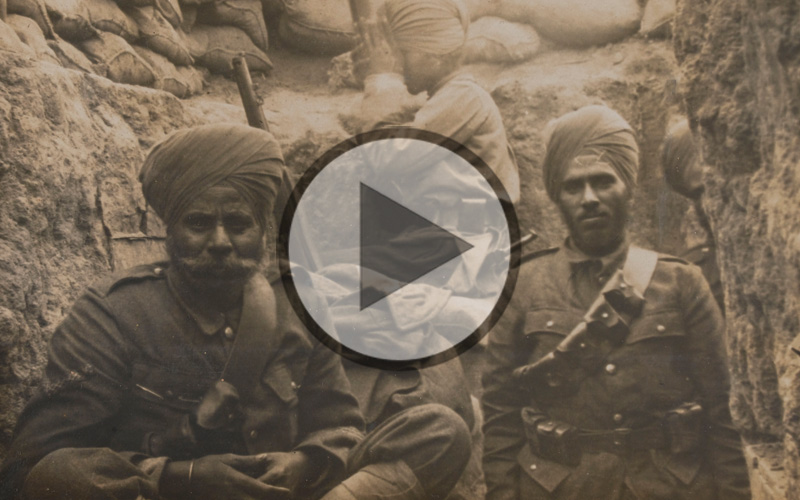 By the end of 1914 the Western Front was locked into trench warfare. And, for the Allies, attacking the Ottoman Empire, knocking it out of the war and opening up an ice-free supply route to Russia seemed to offer a way to end the stalemate.

The crumbling Ottoman Empire had allied itself with the Central Powers, hoping to regain former territories in the Balkans and North Africa. Its attacks on British-ruled Egypt failed and the Allies turned their attention to the Straits of the Dardanelles, hoping to force them open through naval power and capture Constantinople [now Istanbul], the Ottoman capital.

The naval bombardment, in March 1915, nearly succeeded. The French and British navies pounded the shore fortresses to the edge of destruction. But then, disaster struck: three Allied battleships hit mines and sank. The attack was abandoned and a land invasion of the Gallipoli Peninsula was attempted.

The British invasion forces consisted of ten divisions from the British Army, three divisions of Anzacs [Australian and New Zealand Army Corps] from Australia and New Zealand, an Indian infantry brigade, including Gurkha soldiers from Nepal, and the Newfoundland Regiment. Additionally, the Indian Mule Corps and the Zion Mule Corps – which was largely raised from Jewish refugees living in Alexandria – were absolutely crucial to keeping the army supplied.

British troops landed at Cape Helles on the tip of the peninsula and Anzac troops halfway down the western shore. Things went wrong almost immediately. The Anzacs were landed too far from their objective, and at the base of sheer cliffs. Scaling them cost valuable time and allowed the Ottoman forces to keep them pinned against the coast.

Though the Anzacs held their clifftop positions tenaciously, and the British made several attempts to break out, they were contained by the Ottoman troops. As the summer heat and deaths from heatstroke and disease mounted, an attempt was made to open a third front at Suvla Bay. But this, too, ended in failure.

When Bulgaria joined the Central Powers in October 1915, evacuation became the only option. This was the most successful operation of the campaign. The Ottomans suspected nothing and over 35,000 troops and their equipment were re-embarked with very few casualties.

A million men fought in the eight-and-a-half-month series of battles. Overall casualties were high: the Allies lost almost 60,000 dead and 120,000 wounded.

In spite of the bravery of the troops, with 37 VCs [Victoria Crosses] awarded, the knockout blow had failed and a long campaign through Palestine and Syria had to be fought in order to defeat the Ottomans. The campaign’s chief architect, Winston Churchill, became a political outcast.

Yet the suffering and sacrifice had not all been for nothing. From it the Australians and New Zealanders developed their sense of identity – new nations that were born on the shores of the Dardanelles.