Discover the surprising and diverse range of soldiers from all over the Empire, Commonwealth and Dominions who contributed to the British First World War effort on the Western Front. 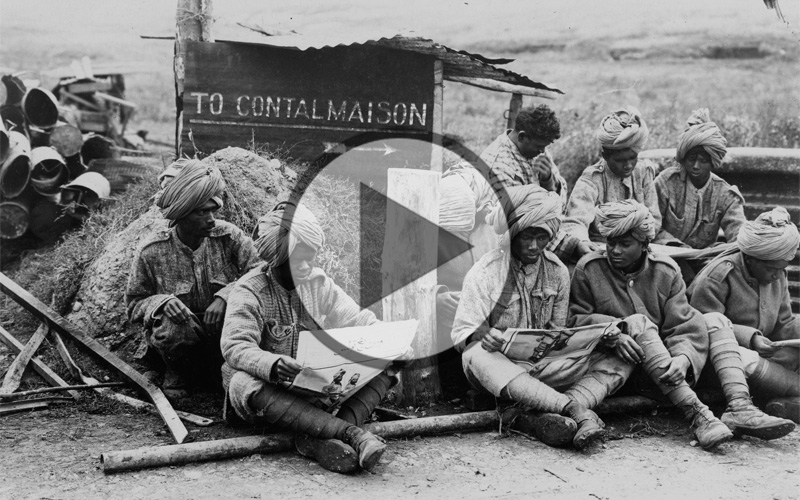 By the end of 1914 the Western Front had frozen into trench warfare from the Swiss border to the channel. The new British commander, Douglas Haig planned to break the stalemate by attacking across the River Somme.

But in February 1916 the Germans attacked at Verdun. And as the ferocity of their assault began to bleed the French Army white, French divisions intended for use on the Somme were sent south as reinforcements and Haig had to recast the offensive as an operation to relieve pressure on the French.

When it began he had 24 divisions under his command: 11 French and 13 British. Colonial and dominion forces were a vital part of his army.

Soldiers from Australia, Canada, New Zealand, South Africa, India, Southern Rhodesia, Newfoundland and Bermuda fought and died alongside recruits of the British New Army and territorial volunteers; most of the professional soldiers of the British Expeditionary Force having been killed in the battles of 1914 and 1915.

On 1 July 120,000 British, French, Bermudan, Rhodesian and Newfoundland troops attacked on a front of 20,000 yards. The aim was to seize a six-mile-deep chunk of German-held territory.

They advanced only a mile and lost almost 20,000 dead and 40,000 missing or wounded. The Rhodesian contingent numbered 90 men; by the end of the day only ten were left alive. 780 Newfoundlanders attacked; 658 were dead, dying or severely wounded within the first hour.

The first day of the Somme had resulted in the worst casualties ever suffered by the British Army. But the fighting was to last another 141 days, in a series of 15 interlinked battles fought over a startlingly small area.

The Australians joined the fighting on 19 July, suffering shocking casualties but capturing the village of Pozières. By the 5th they were withdrawn, having suffered over 23,000 casualties in 45 days.

The Canadians, New Zealanders and South Africans all made heroic contributions to the offensive and suffered terrible casualties as a result. The South Africans took Delville Wood despite suffering 80 per cent casualties. Six days of fighting reduced the original 3,155 men to 619.

With the weather deteriorating, Haig called off the battle on 18 November. By then his troops had advanced six miles. It had taken more than four months to achieve the first day’s objectives.

The battle cost the Allies over 600,000 casualties, the Germans over 450,000. Yet in spite of the appalling loss of life, there were gains.

The German army had lost some of its best troops and its military strength had been permanently undermined. Without the Somme, victory in 1918 would have been unattainable. The losses suffered by the colonial and dominion troops were not in vain.