The Commonwealth Call to Arms 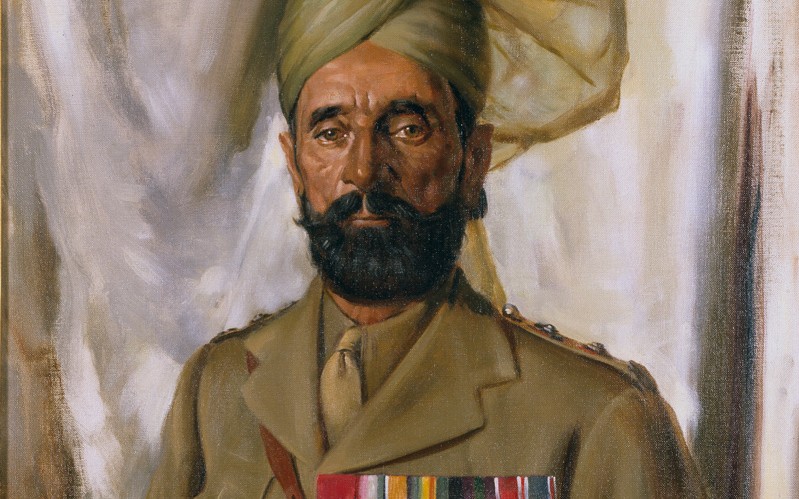 To demonstrate the response of Commonwealth soldiers at the outbreak of the First World War, we have selected a few stories of individual heroism from across the world.

When war broke out in 1914, thousands flocked to the colours. However, it wasn’t just the men of Britain who answered the call to arms. Throughout the Commonwealth the ranks were swollen by recruits keen to fight for the British cause.

So great was the response that Commonwealth armies made up a third of the total mobilisation across the Empire during the conflict. We’ve picked just a handful of heroic stories that demonstrate their vital contribution.

Subadar Khudadad Khan arrived in France in September 1914 as part of the Indian Army force sent to relieve the British Expeditionary Force (BEF).

While serving with the machine-gun detachment of the 129th Duke of Connaught’s Own Baluchis Regiment, Subadar Khan came under intense enemy attack. With the British officer in charge of the detachment wounded, and one of their two guns destroyed by a shell, Subadar Khan continued to fire on the enemy.

Even after all others in his detachment were killed, Subadar Khan held the German advance until reinforcements could arrive. Overrun by the enemy, he then managed to crawl back to his regiment despite serious wounds.

These three Australian soldiers were awarded the Victoria Cross for their efforts in the Battle of Lone Pine in 1915, on the Gallipoli Peninsula.

Then-Lieutenant Tubb held a trench newly-captured from Ottoman forces, which on 9 August 1915 faced fierce counter-attack from the enemy. At one point, just a foot of the barricade remained.

Supported by Corporals Dunstan and Burton, Lieutenant Tubb managed to rebuild the barricade no less than three times under continued bombardment. Their efforts meant that the Allies succeeded in holding the position.

The three paid a costly price for their dedication; Corporal Burton was killed by bombing during the defence, Corporal Dunstan was blinded for a year and Lieutenant Tubb was severely wounded. Their VCs are three of just nine awarded to Australians during the Gallipoli campaign.

Captain Beauchamp-Proctor served with the South African Army during the South-West Africa Campaign (1914-15) and later in the Royal Flying Corps (RFC). His bravery in the air won him a multitude of military decorations.

While serving with the British Indian Army at the Second Battle of Ypres in April 1915, then-Jemadar Dast’s regiment came under heavy attack.

With all of the British officers killed or wounded, Jemadar Dast stepped in to re-group and command the men until the retirement order was given. He also repeatedly risked his life rescuing eight wounded British and Indian officers under heavy fire.

He was rewarded for his actions with a Victoria Cross.