Story of a Missing Soldier: Private James A Feist 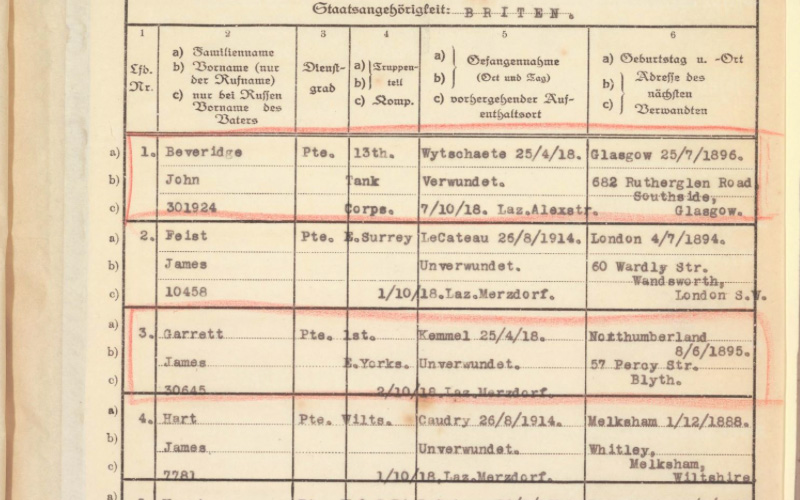 Researchers from the War Graves Adjudication Unit recently joined the NAM team to research individuals who served in the British Army in the First and Second World Wars. They often come across unique and interesting stories, including the mystery of Private James A Feist.

James Albert Feist was born in Wandsworth in 1894, joined the British Army in 1912 and was posted to the East Surrey Regiment. Less than two weeks after the First World War was declared in 1914, the battalion were prepared for service on the Western Front.

Private Feist was reported as killed in action sometime between the 24 and 29 August, as confirmed by his death certificate and reported by the 1st Battalion East Surrey Regiment War Diary. His location of death is simply noted as ‘France’ and his parents would have received the dreaded telegram confirming their son’s death.

Despite this, the War Graves team find other documents that indicate Feist may not have died after all. Family history website Ancestry.co.uk located a marriage, with the same name and address as the soldier, and the England and Wales Death Index Records reported a death of a James A Feist aged 62. But this was not enough to prove Feist had continued life after war.

In August 2014, the International Committee of the Red Cross (ICRC), an organisation that supervised the treatment of prisoners during the First World War, published their First World War records online. This meant the team could find out if Private Feist had been a prisoner of war and not killed in action.

The records show that Feist was captured on 26 August 1914 at the Battle of Le Cateau. Records predominantly written in German indicate that he was ‘Unverwundet’ (unwounded) when he was apprehended, and was initially held at Doberitz, and later at Merzdorf prisoner-of-war camps. Unfortunately, there are no repatriation documents concerning Feist. However, he most likely returned home in late 1918, following the Armistice with Germany.

With the immense number of casualties and deaths that occurred in the First World War, it is highly understandable why Private Feist was thought to have been killed in action. However, the release of these crucial records by the ICRC give a vital insight into what happened to the prisoners of the First World War.

It is the responsibility of the War Graves Adjudication Unit to professionally research individuals who served in the British Army in the First and Second World Wars. This work involves close cooperation with the Commonwealth War Graves Commission, the multinational organisation that arranges the commemoration of the 1.7 million Commonwealth World War dead. This research ensures that the personal circumstances of individual soldiers are correctly recorded and involves adjudicating on possible cases of non-commemoration, as well as reviewing personal information and service details for soldiers who have been recorded as deceased.