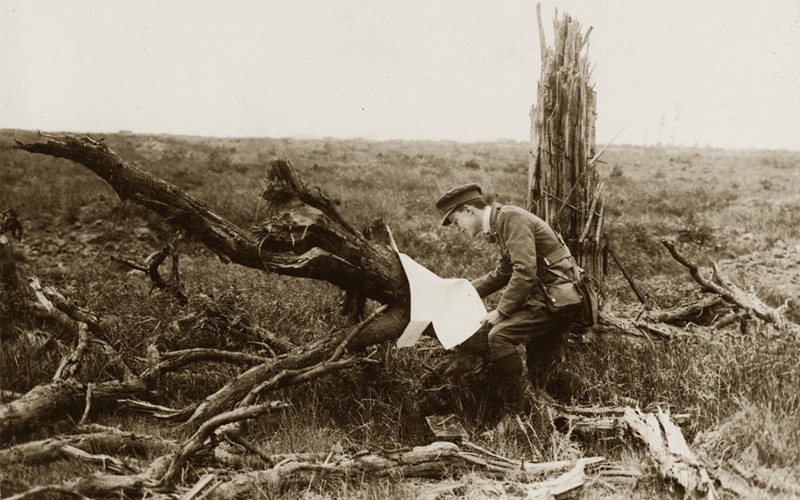 ‘Battle of Messines Ridge. An officer finds a German map’, 1917

Following a recent Lunchtime Lecture on the subject of special operations and spies, we decided to look back at the efforts of the British Intelligence Corps in the First World War.

Before the First World War began, the British Intelligence service was extremely small. On the outbreak of war, around 50 soldiers, police officers and civilians were called up by the War Office to form an intelligence team.

The Intelligence Corps was designed to develop strategies for the deployment of soldiers, fusing together information from a number of sources. This was intended to give the Army the upper hand on the battlefield, with increased knowledge of the enemy’s whereabouts.

The first operations saw members of the Intelligence Corps riding motorbikes onto desolate battlefields, into unused trenches and around areas where the enemy was suspected to have been.

One of the better-known spy-bikers was Second Lieutenant Rollerston West, who earned a Distinguished Service Order (DSO) for his exploits in 1914. Having ridden to the French village of Pontoise to retrieve maps left behind during the British Expeditionary Force’s (BEF) retreat, he discovered a bridge crossing the river Oise that had been prepared for demolition. The bridge was duly destroyed, delaying the German Army’s advance and safeguarding the BEF’s withdrawal.

The Intelligence Corps ran many other operations during the First World War, including placing soldiers behind enemy lines and protecting soldiers from enemy spies. Some parts of the Corps also worked with special psychology units, developing prisoner-of-war debriefing techniques in order to retrieve further information.

The First World War had a huge effect on the growth of the Intelligence Corps and it proved to be an essential formation for modern warfare. However, the Corps was not sustained during the inter-war era, and had to be rebuilt during the Second World War.