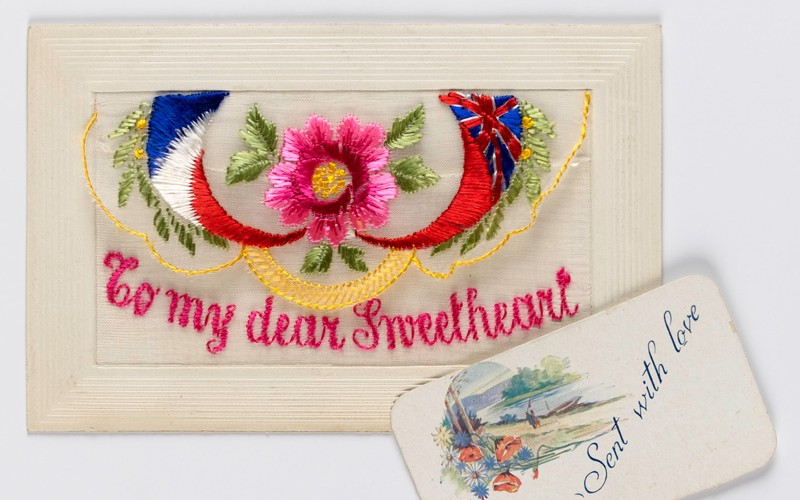 As Valentine’s Day approaches we have searched our archives to share some of the heart-warming love letters sent from the battlefields of the Great War.

Private Holland Leckie Chrismas of the Machine Gun Corps sent this beautifully embroidered postcard to his wife from the Western Front in 1916. He jokes that the card is ‘rather soppy for people of our age’. However, he thinks his ‘dear Sweetheart’ will appreciate it.

Cheerful messages like this were very common, often to spare the soldiers’ partners the truth of the draining conditions their loved ones were facing.

On Christmas Day 1918 the Prince of Wales (later King Edward VIII) sent a love letter to his mistress, Mrs Freda Dudley Ward. He recounts his duties on the Western Front shortly after the end of hostilities and talks heavily of his sorrow at not receiving a letter from her:

‘I’m getting just a teeny bit worried about your long silence, beloved one… I haven’t had a letter since 16 December and of course I’m too miserable for words!! However, I must be patient and feel sure I shall find the longed for envelope addressed in the only handwriting that I ever want to see…’

This highlights the loneliness of life away from home on active service and how much soldiers missed their loved ones.

With hand-written letters the only way of communicating, regular mail was seen as being vital to boosting morale and an important link between home and the battlefield.

He opens with ‘My dearest girl’ and apologises for the delay in writing, explaining that his only free time is ‘those few brief periods spent in getting my meals’. He goes on to talk about how he hopes to come home one weekend, but warns her not to get her hopes up.

Sadly, Harrington was killed on 28 April 1915 by a shell blast during the Second Battle of Ypres.

Discover more bittersweet stories like these in Wives and Sweethearts: Love Letters Sent During Wartime by Alastair Massie, Head of Academic Access at the National Army Museum.