Prisoners of the Great War 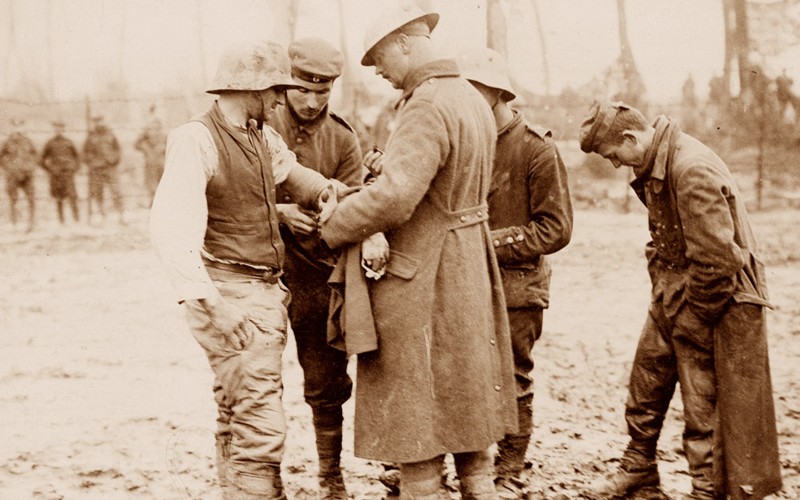 Last month’s edition of Soldiers’ Stories featured Lieutenant-Colonel Reginald Bond DSO, whose artwork provides a visual record of his time as a prisoner of war (POW). This inspired us to delve deeper into the story of soldiers in captivity during the First World War.

An estimated 8 million soldiers were taken prisoner during the First World War. Housing and feeding them proved hugely problematic for both sides.

Before war was declared, treaties were signed to regulate the treatment of POWs. However, there was no system in place for accommodating them. After war broke out, prison camps were hurriedly built according to need, with most constructed from scratch.

The Hague Conventions, initiated at the end of the 19th century, forced Western nations to reflect on the legal aspects of war, including the treatment of captive soldiers. They addressed various aspects of life in captivity – nourishment, dress, work, religion, mail and personal belongings – and established rules for treating POWs humanely.

Sending letters to family and friends was very important to POWs. However, the writer would have to be careful as captors would read the letters before they were sent. As a result, POWs would not always be honest about how they were being treated, or provide clues as to where they were being held, for fear of facing punishment or the removal of privileges.

By 1915, Army leaders were beginning to reconsider the uses and treatment of POWs, increasingly seeing them as a source of free labour. Most of Europe had placed non-officer POWs into trades by 1917. However, it was illegal to force officer ranks to undertake labour. Due to trade union opposition, Britain delayed using POWs for labour until 1917.

Many prisoners were captured during trench raids. These involved a group of men travelling across no-man’s land to enter the enemy’s trenches unexpectedly. Once soldiers had been taken prisoner, they would be interrogated for information about their unit and other intelligence.

A POW’s experience would not have been pleasant on either side. Many died from malnutrition and diseases caused by poor sanitation.