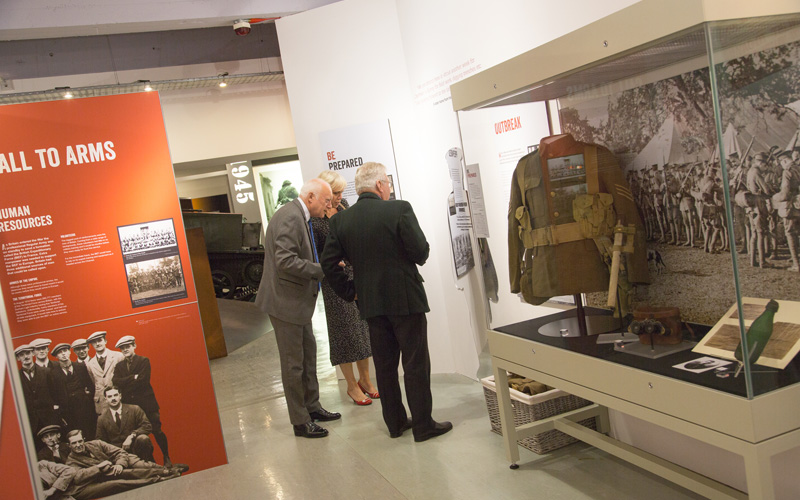 NAM recently partnered with the Durham Light Infantry Museum on an exhibition telling the unique story of that regiment and its soldiers during the early months of the First World War. Following the closure of this fascinating display, we share some of the regiment’s experiences.

Before the outbreak of war, the Durham Light Infantry (DLI) was made up of nine battalions. But as thousands flocked to answer Lord Kitchener’s call to arms, that number grew to an astounding 43!

Several of these were ‘Pals’ battalions – units in which men could enlist and serve alongside those with whom they had things in common. It was hoped that this would encourage more men to join up.

The Army initially struggled to provide these new soldiers with enough equipment, weapons, uniform and sometimes even food. The new DLI battalions were trained in camps and depots across the country such as Aldershot, Frensham and Halton Park.

In September 1914 the 2nd Battalion DLI was sent as reinforcements for the hard-pressed British Expeditionary Force. During its first day of service on the Western Front, at Troyon on the River Aisne in northern France, it lost 40 men with 100 others wounded or captured.

After the initial German advance was halted, the 2nd Battalion DLI was immediately involved in heavy fighting in and out of trenches. They moved north to the town of Armentières on the French-Belgian border and by November they were in trenches on the outskirts of the town. They would remain there until May 1915.

For the first time in almost a century Britain was engaged in a war on its doorstep and the civilian population felt the effects. When Hartlepool was shelled on 16 December 1914, the recently formed 18th Battalion DLI was stationed there on coastal defence duties. They became one of the first battalions of the New Army to come under fire.

It is clear that the men of Durham were extremely courageous and willing, forming one of the largest regiments of the New Army. By the end of hostilities, the regiment had lost around 13,000 men, with many thousands more wounded, captured or unaccounted for.