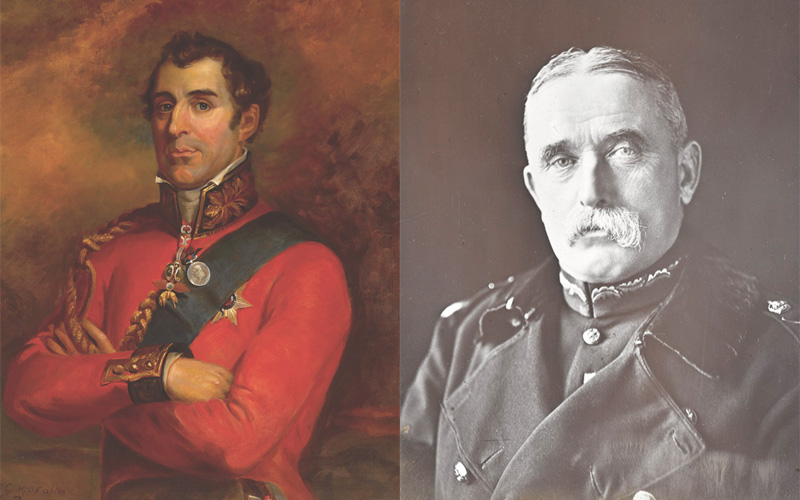 As the nation commemorates the Battle of Waterloo in its bicentenary year, we contrast the commanders of the British Army in 1915 with those 100 years earlier in 1815.

On 18 June 1815, Arthur Wellesley 1st Duke of Wellington, led an Allied army to victory, bringing an end to Napoleon’s dominance of Europe. Born in Dublin and educated at Eton, Wellington joined the army in 1787. A veteran of campaigns in India and the Peninsular War (1808-14), he was already a national hero when he faced Napoleon at Waterloo.

One hundred years later, Field Marshal Sir John French was in command of the British Expeditionary Force (BEF). He too was an experienced general, who had commanded cavalry during the Boer War (1899-1902) winning national renown. However, like many generals of his generation, he struggled to come to terms with modern attritional warfare on the Western Front. Many of his contemporaries also believed he was too cautious and lacked battle initiative.

Following victory at Waterloo, Wellington was lauded on his return to Britain and showered with further honours. He eventually entered politics and became prime minister (1828-30 and 1834).

Throughout 1915, Sir John French presided over a series of attacks that failed to secure a decisive breakthrough. Clashes with his colleagues eventually made his position untenable. French was forced to resign from his post and was replaced by General Sir Douglas Haig. French was appointed Commander-in-Chief Home Forces and made Viscount French Ypres.

Wellington and French both led British armies on the Continent at times of national emergency. The Duke passed away in 1852 and was given a state funeral. He is remembered by many as Britain’s greatest general. French died at his home in 1925 with no official ceremony. While military historians still hotly debate his tenure of command, few today remember his contribution.