Fritz & Tommy: Across the Barbed Wire 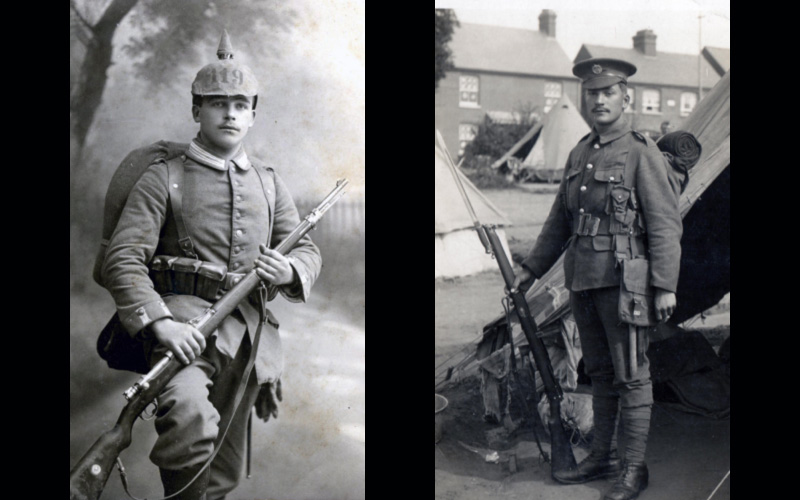 In our Celebrity Speaker lecture on 21 January 2016, First World War historians Peter Doyle and Robin Schäfer will explore personal letters and diaries from boys on both sides. Here, Peter and Rob give a sneak peek at what’s included.

Fritz and Tommy: two protagonists in a war that claimed over ten million military lives and that was fought on five continents. Who were they? What drove them to fight? And what was it like for them both, separated by lines of trenches and fields of cruelly-barbed wire?

The First World War (der 1. Weltkrieg) defined Europe. While it is true that the wars of European liberation and confederation that erupted each decade of the late 19th century created new nation states, the Great War was a conflict that shaped the continent we know today. Old empires fell, monarchies were toppled, new nations created.

But with the causes, effects and grand strategies of the war discussed now – a hundred years on – with renewed vigour, there are also human stories. And it is those stories we explore in our new book, Fritz & Tommy, published by the History Press, derived from the testimonies of those who actually experienced life at the front, in letters, diaries and contemporary accounts.

Both armies would meet for the first time at the Belgian town of Mons on 23 August 1914, and would face each other for another four years. In all, British armies and those of its Empire saw almost 900,000 military deaths during the First World War. The Germans lost more than twice this, over two million (and with some 750,000 civilians dead through malnutrition). Add to this the millions who returned home wounded, maimed and mentally scarred, the war left an indelible mark on both countries.

As we personally reflect upon these figures, we can think of our forebears: Wehrmann Peter Gilgenbach, wounded on the Marne in September 1914 or Private William Black, killed at Bellewaarde in Flanders in 1915; Private Thomas Roberts, killed in action at Passchendaele in August 1917, Private Albert Howard, who died of wounds at Arras in October 1918, aged just 18, or brothers Joseph and August Reinhardt who were both killed near Luxemont-et-Villotte within just two days of each other in the same month.

Framing experiences in this way, it is possible to consider the lives of everyman soldiers as they faced their enemies across the barbed wire – and of their extended families; the shared experience of humanity. From the testimonies we examined in researching our book it is possible to perceive, beneath the layers of our ‘expectation of the horrors of trench warfare’, something more simple – the day-to-day lives of ordinary men in extraordinary circumstances. And through these accounts, it was sometimes surprisingly difficult to tell ‘friend’ from ‘foe’.

Over the century that has passed since the Great War began – clouded by the impact of another, even more terrible conflict – the origins of the Great War and the nature of its battles and leaders have been much discussed. Almost before the war’s end, books and articles sought to address the balance of war guilt, and consider accusations of incompetence by leaders. Yet above this climate of accusation and counter-accusation, there remains a simple truth: that soldiers on both sides believed in the cause they were fighting for. They fought to protect their homes, their families, and their way of life. They fought for King and Country (für König und Vaterland) and they believed that God was on their side (Gott mit uns).