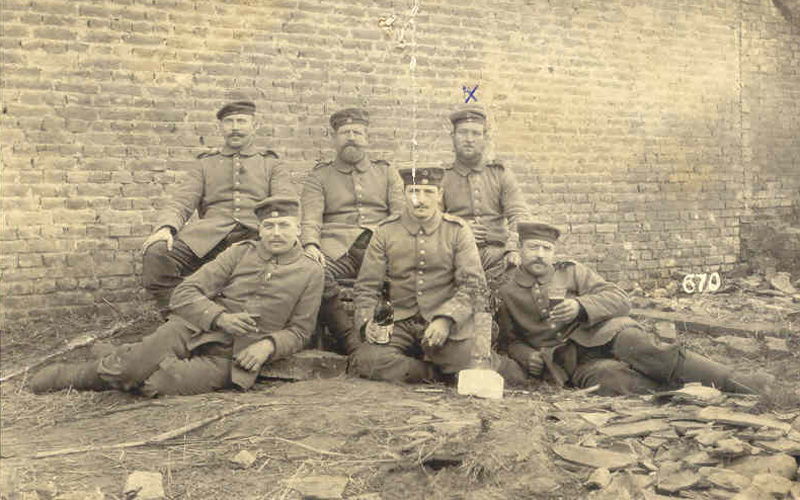 On 25 February 2016, battlefield archaeologist Andy Robertshaw will talk about the five missing First World War soldiers identified as a result of his many digs in France and Belgium. Here Andy reveals the excitement of his very first trench project.

From an early age, I was a frequent visitor to museums. When I was around five years old, my mother and I went to visit the Yorkshire Museum, set in the ruins of St Mary’s Abbey. While exploring the site, I glanced into a hole, at the bottom of which was a female archaeologist. As this was the 1960s, and health and safety was yet to be invented, she asked me if I’d like to ‘have a go’.

Despite being very shy, I climbed down the ladder and in minutes we ‘found’ a collection of Roman beads. I still remember the archaeologist theorising that these may have been lost when the string broke, or perhaps buried when the city was attacked. Suddenly I was hooked, and became the curator of a museum in my bedroom within a few days. Admittedly, this consisted of a musket ball from the Battle of Marston Moor and a collection of toy animals, but it was still ‘my’ museum.

Many years later, I was asked by the BBC to assemble a team to investigate the potential site of the dug-out on the Somme, where Wilfred Owen served in January 1917, and about which he wrote the poem The Sentry. Although the project failed to locate the dug-out, the team discovered three sets of human remains.

My initiation into working with an exhumed soldier – one of the ‘missing’ – began when I was asked whether he was British or German. I was mystified until a helpful colleague suggested that I look at the buttons. Even I could do that! And, within a few minutes, I had identified the soldier as German.

After a team of conservators at UCL had cleaned his corroded dog tag, we were able to identify the man fully. His name was Jakob Hönes and he was a Württemberg soldier who had died in battle against the French in June 1915.

Surprisingly, at the time of identification Jakob’s son was still alive. When we went to deliver the news of us finding his father, after more than 90 years of not knowing, he simply said, ‘I always knew they would.’ The fact that I have visited his home in Germany, met his descendants and had a beer or two with his grandson, still strikes me as remarkable.