The Royal Fusiliers and the Victoria Cross 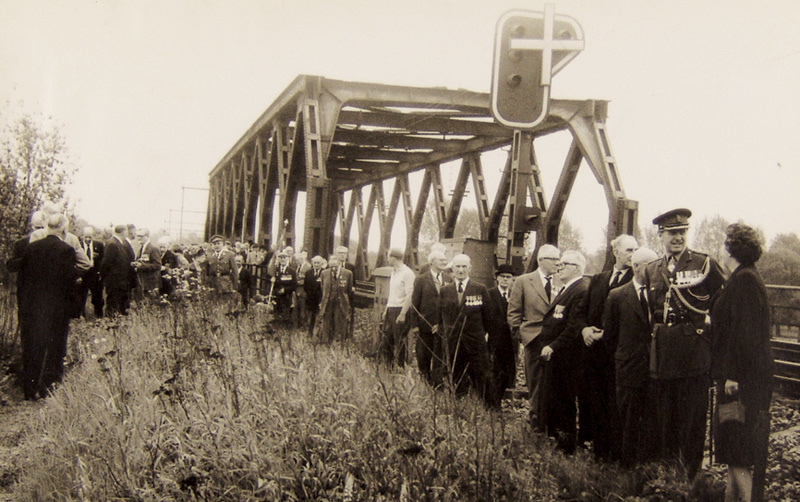 A memorial plaque was placed on Nimy Bridge to mark the place where Godley and Dease made their stand.

With the opening of the National Army Museum’s Outbreak 1914: Royal Fusiliers Go to War this week, we take a look at the remarkable achievements of The Royal Fusiliers during the first few weeks of the Great War.

The penultimate exhibition in our Outbreak 1914! series opened this week, taking place at The Fusilier Museum London. The exhibition remembers the role of The Royal Fusiliers in the conflict, with its opening date, 4 August, coinciding poignantly with Britain’s declaration of war 100 years ago.

Owing to this significant historical date, we decided to reflect on the exceptional efforts of The Royal Fusiliers in the first few weeks following the declaration of war.

On 23 August 1914, less than three weeks after Britain declared war, Lieutenant Maurice Dease and Private Sidney Godley of 4th Battalion, The Royal Fusiliers were awarded the first Victoria Crosses (VC) of the Great War for their remarkable acts of bravery.

During the Battle of the Mons, Lieutenant Dease and Private Godley volunteered to defend the Nimy Railway Bridge with two machine-guns, allowing the rest of their unit to retreat with the British Expeditionary Force and form a better defence line on the River Marne.

Despite being a particularly dangerous post that had already seen the deaths of several men, Dease and Godley continued to man the guns and defend the bridge. Eventually Dease was killed yet Godley continued to hold the bridge single-handedly, sustaining serious injuries to the head. He managed to occupy the bridge for a further two hours before he ran out of ammunition and was soon captured by the advancing Germans.

Nonetheless, the acts of courage that Dease and Godley demonstrated allowed the rest of the 4th Battalion to escape the Germans. This gallantry resulted in both men receiving the first VCs of the First World War. Although Dease’s award was posthumous, Godley survived a prisoner-of-war camp to receive his cross from King George V at Buckingham Palace on 15 February 1919.

The Victoria Cross is Britain’s most prestigious gallantry award for action in the face of the enemy and these two men made notable military contributions through their actions. A memorial plaque now stands on Nimy Bridge to mark the outstanding efforts of Dease and Godley. 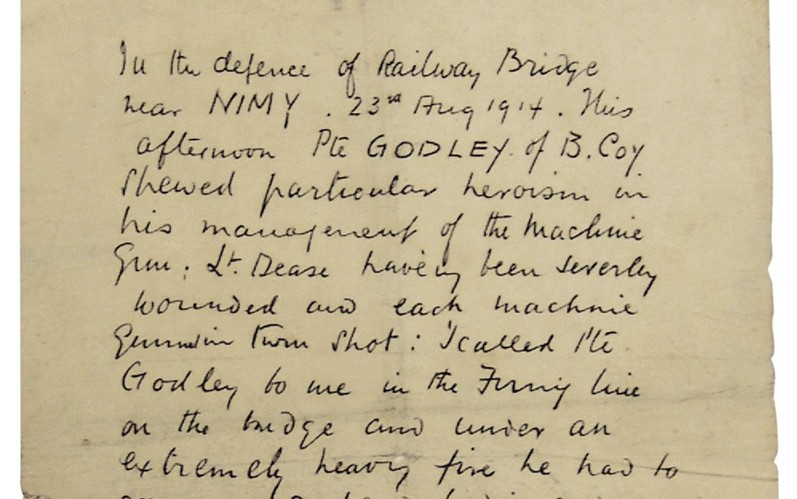 Private Godley’s commanding officer wrote this note recognising Godley’s bravery. The recommendation led to him receiving the Victoria Cross, Britain’s highest military decoration for valour in the face of the enemy.