Discover the surprising and diverse range of soldiers from all over the Empire, Commonwealth and Dominions who contributed to the British First World War effort in Palestine. 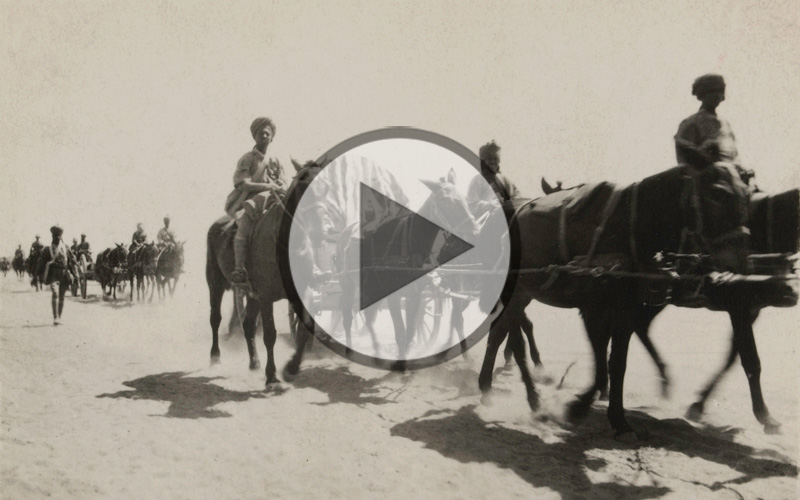 The disaster of Gallipoli in 1915 ended British hopes of a swift knock-out blow against the Ottoman Empire. And a long slog through Sinai and Palestine ensued.

The British forces relied heavily on Empire troops with soldiers coming from Australia, India, New Zealand, the West Indies, Hong Kong and Singapore, Palestine and Arabia, as well as Britain.

Though the Ottomans were cleared from Sinai by the beginning of 1916, the Allied drive north was halted when two frontal attacks on Gaza failed.

But in April 1917 the British General Edmund Allenby took over. As a believer in mobile warfare, he decided to encircle Gaza rather than risk another failed assault.

Unlike the Western Front, where mud, machine guns and barbed wire rendered cavalry useless, mounted British Indian and Anzac troops, and the Arab Egyptian Labour Corps that supported them, would be vital to Allenby’s plans.

He ordered his troops to drive deep into the desert and take Beersheba. The strategy worked. An audacious cavalry charge by the Australian Light Horse helped shatter the Ottoman defences. Beersheba fell and the road to Jerusalem was open.

It fell in December 1917. Allenby, its conqueror, dismounted and entered the city on foot to show he had come as a liberator and not a conqueror.

By the summer of 1918 the Ottoman Army had been driven north through Palestine, and they regrouped at Megiddo. This was exactly what Allenby wanted. He set about planning a co-ordinated attack with cavalry, infantry, artillery, armoured vehicles and aircraft, intending to annihilate them in one fell swoop.

With the Desert Mounted Corps blocking off all escape routes, and Arab rebels mounting guerrilla raids on the Ottoman lines of communication, British and Indian troops launched an all-out assault.

At the Battle of Sharon, the Ottoman lines were broken and panic ensued. Within days Afulah, Beisan, Jenin, Nazareth and Haifa had all fallen to the British.

The Battle of Nablus was an even bigger Ottoman disaster. Following their defeat, the retreating columns were attacked by British and Australian aircraft and destroyed with an hour. The litter of dead bodies and equipment stretched for 6 miles down the Wadi el Fara road.

On 22 September British forces captured the Ottoman 53rd Division commander and secured the Jisr ed Damiye bridge across the Jordan River. The last remnants of the Ottoman Fourth Army attempted to retreat north. They were bombed continuously by Allied aircraft and their escape route was blocked by the Anzac Mounted Division.

Fearing the vengeance of Arab irregulars, who loathed the Ottomans for their brutal colonial rule, the Ottoman Army surrendered.

The campaign had lasted almost four years and cost the Allies 550,000 casualties. In a battle lasting six days the troops of Empire, Commonwealth and Dominions destroyed the 600-year-old Ottoman Empire. The Middle East would be changed forever.